Last year, Chinese millionaires maxed out the quota for EB-5 visas under the U.S.’s Immigrant Investor Program, and recently it was reported that 90% of Australia’s Significant Investor visas were given to Chinese nationals. All over the world, immigrant investor programs are being flooded with applicants from China.

Since 1990, China has gone from being the 7th largest exporter of immigrants to the 4th largest, an increase of more than 125%. Chinese people are emigrating in ever greater numbers, particularly the wealthy. Meanwhile, a recent survey from Barclays shows that 47% of wealthy Chinese would like to emigrate. The response rate for the survey was 29% worldwide.

As more Chinese become wealthy, the number of people who want to emigrate is increasing. So where do wealthy Chinese want to go? Rich Chinese Want to Go to North America

According to the Hurun Report’s “2014 Immigrant Investor White Paper,” the U.S. and Canada are the first choices for wealthy Chinese looking to emigrate.

Since most high-net-worth Chinese accumulate their wealth in China, from a business perspective it is advantageous for them to remain close to China. So what is involved in getting an immigrant visa to a foreign country?

Requirements for Getting an Immigrant Investor Visa

Should the Cayman Islands be activly be trying to attract this type of investor tot he Cayman Islands? See http://www.scmp.com/business/companies/article/1677989/li-ka-shing-restructures-group?page=all> 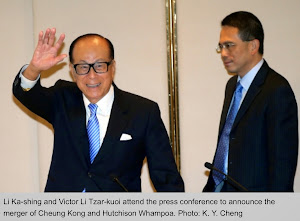 Li Ka-shing yesterday added fresh grist to rumours about his waning interest in Hong Kong as he unveiled a sweeping restructuring of his business empire, switching its base of incorporation to the Cayman Islands from Hong Kong.

Li – the chairman of Cheung Kong (Holdings) and its subsidiary Hutchison Whampoa, which together have a total market capitalisation of HK$661.68 billion – said all of his two flagship companies’ non-property assets, including ports, telecommunications, retail, infrastructure and energy, would be injected into a newly formed company, CK Hutchison Holdings (CKH Holdings), incorporated in the Cayman Islands.

As part of the reorganisation, all property businesses including those overseas in the two companies will be injected into another new entity, Cheung Kong Property Holdings, which will seek a separate listing on the Hong Kong stock exchange by introduction.

CK Property will be one of the largest property companies listed in Hong Kong.

Speaking at a press conference yesterday, Li, the richest man in Hong Kong, said the restructuring would be good for all shareholders.

According to a 70-page announcement filed with the Hong Kong stock exchange, the move is aimed at creating shareholder value as it will enable all the group’s assets to be fully reflected and remove the “layered holding structure” between Cheung Kong and Hutchison.

That would allow shareholders to directly invest in the two separate listed vehicles.

Li, however, rejected suggestions that the proposed reorganisation is a sign of his withdrawal from the city.

“More than 75 per cent of companies that have listed in Hong Kong in the past 10 years or so are incorporated in Cayman Islands, including state-owned enterprises. Have they also lost confidence in Hong Kong?” said Li, adding that the company was just “following the trend”. More