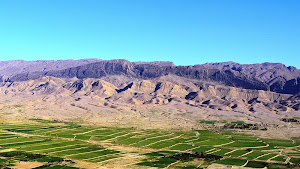 Anxious farmers in Pakistan waited for weeks for the rains to arrive – but when the skies finally opened, the downpour was so intense it destroyed crops and put the harvest in jeopardy.

“We weather scientists are really in shock, and so are farmers, who have suffered economic losses due to crop damage,” says Muzammil Hussain, a weather forecasting scientist at the Pakistan Meteorological Department (PMD).

Farmers across much of Pakistan plant winter crops of wheat, oilseed and potato late in the year and wait for rains to water the land.

This year, the rains arrived more than three weeks late and were unusually heavy, accompanied by violent hailstorms. Along with the rains, temperatures also dropped.

Ibrahim Mughal, chairman of the Pakistan Agri Forum, says excessive moisture due to heavy bouts of late rain is likely to lead to outbreaks of fungus on crops, and production could be halved.

“If the rains come a month ahead of the harvesting time [April to mid-May], it is always disastrous,” he says. “It can hit production for a crop such as wheat by between 20% and 30%, and if the rain is accompanied by hailstorms and winds then the losses can escalate to more than 50%.”

Arif Mahmood, a former director general at PMD, says the onset of winter across much of Pakistan is being delayed by two to three days every year, and there is an urgent need for farmers to adapt to such changes.

“Over recent years, winter has been delayed by 25 to 30 days, and also the intensity of the cold has increased, which has affected almost every field of life − from agriculture to urban life.”

This year has also been marked by abrupt changes in temperature. Ghulam Rasul, a senior scientist at PMD, says big swings in temperature are likely to add to the problems being faced by millions of farmers in Pakistan.

“The average temperature during the first two weeks [of March] was between 11 and 13 degrees Celsius, but now it’s on a continuous upward trend and has reached 26˚C over the space of two days,” he reports.

“The winter rains in the north and central area of Pakistan, and the sudden rise and fall in temperature, are related to climate change.”

The states of Uttar Pradesh and Maharashtra – the two most populous states in the country – have been particularly badly hit.

In Maharashtra, snow and landslides have blocked roads and cut off towns and villages.

In Uttar Pradesh, there are fears that more than 50% of the wheat crop has been lost in the eastern part of the state. More

This article was produced by the Climate News Network

For the Pakistan Metorlogical Department to claim be shocked by this event says to me that they have obviously not been following the global climate change discussion. Farming methods and water control and harvesting will have to change to mitigate the changing climate. Permaculture farming methods would be a good place to start. See http://permaculturenews.org/about-permaculture-and-the-pri/ Editor