By the time nations once again get round a table in Paris in December to discuss climate change, hunger should be on the menu. Researchers have just warned that a new and aggressive strain of yellow rust fungus is now a threat to Britain’s wheat harvest. 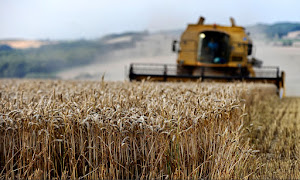 Another team has calculated that average yields of wheat per field, which only two decades ago were rising rapidly, are now down 2.5%, and barley by 3.8%. In each case, the scientists identify climate change as a contributing factor. Global warming has barely begun but climate scientists have been warning about the consequences for food security for 30 years.

The two latest bits of research into wheat yields are not isolated indicators of tomorrow’s troubles. The big heat has yet to arrive. It will be catastrophic. Another group has studied the consequences for harvests of extremes of heat and calculated that for each 1C notch in the thermometer, global wheat yields could fall by 6%. Some latitudes will benefit, but overall, world harvests could fall. This is very bad news: wheat is one of the world’s staples, and the world’s largest source of vegetable protein. There are other factors at play in the fields. Within a decade, 2.9 billion people in 48 nations will experience chronic water scarcity, another research team warns.

Agriculture consumes 70% of the world water supplies and action is needed “to pre-empt looming conflicts born of desperation”. Separately, US geologists have used historical analyses to work out what modern agriculture does to topsoil. When European settlers took the plough to the American heartlands, erosion accelerated one hundred-fold. At peak, an inch of soil was lost every 25 years. Before the Europeans, wind and water erosion took 2,500 years to remove the same thin layer. Because of erosion, overgrazing and drought, the planet’s farmland is being degraded at a catastrophic rate. An estimated 10m hectares are now abandoned each year; something the size of a family farm every minute. And as the food supply is threatened, demand will accelerate. There will be many more hungry people at the table.

In the last year, researchers re-examined UN population projections and decided that the global numbers may not peak at 9 billion. By 2100, the world could be home to 12 billion and still rising. By 2100, according to business-as-usual climate projections, temperatures will have risen by 4C and sea levels by a metre or so. So land that is ever less productive will be expected to deliver vastly more food at ever greater cost in fossil fuel energy to feed increasingly conflict-torn nation states.

Solutions exist but none are easy. All will require a generous adjustment between the haves and the have-nots and sustained global cooperation. That sounds like a dream, but the alternative is a nightmare. The enduring lesson of history is that drought and famine feed conflict, and conflict breeds more privation, and despair. Come December, each aspect of the climate challenge will have become more pressing, and more complex. Everything should be on the table in Paris except perhaps, symbolically, lunch. More