Cayman could be ‘carbon neutral’ in six years, says entrepreneur

Sir Richard Branson told Cayman Islands students they need to lobby their government to go green. He said the island could save money and be “carbon neutral” within six years if leaders committed to clean energy. 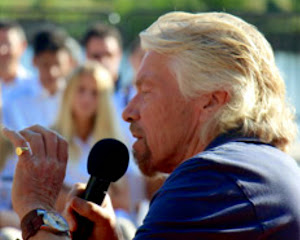 Speaking at a forum for students at Camana Bay on Friday, Sir Richard sounded a dire warning for the world’s coral reefs, saying it may already be too late to save marine ecosystems from the impact of global warming.

But he said more could be done to move toward clean energy and lessen the impact of carbon emissions on the environment.

And he said young people would need to lead the campaign for more environmentally friendly policies from their governments.

“If a group of you, just the people here, put placards above your head and went to the government, you’ve got a force to be reckoned with,” he said.

“The Cayman Islands could be carbon neutral in five or six years and save themselves a lot of money, but it needs absolute determination from the government to get you there.”

Sir Richard acknowledged it is difficult to get governments to think beyond the short term. But he said he is optimistic that international leaders would put the necessary policies in place to achieve total clean energy across the globe within the next 50 years.

The billionaire businessman, who owns his own Caribbean island powered completely from renewable sources, believes the energy revolution can start in the region.

He has launched a “10-island challenge,” starting in Aruba, to assist small islands in moving toward 100 percent renewable energy.

“It would be great if we could get the Cayman Islands to join and make it the 11-island challenge,” he said.

“I’ll be bending the arm of your prime minister [sic] later today to see if we can get him on board.”

Sir Richard believes the Caribbean can be a hot house of innovation in the clean energy sector, and he told the students there would be many opportunities for scientists and entrepreneurs to tackle the world’s problems.

“If we move forward to when you are 50 or 60, I hope the world will be powered completely by clean energy. It is definitely doable,” he added. More