Following the defeat of a United Nations Security Council resolution that demanded an end to Israeli occupation and recognition of Palestinian statehood, Palestine's president Mahmoud Abbas signed a Palestinian request to join the International Criminal Court on Wednesday, a move that the Guardian wrote sets “Palestinians on a diplomatic collision course with Israel and the U.S.” 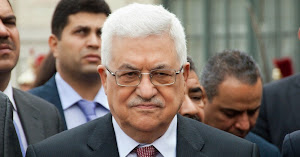 “There is aggression practiced against our land and our country, and the Security Council has let us down—where shall we go?” Mr. Abbas reportedly said at his headquarters in the West Bank city of Ramallah, as he signed the Rome Statute, the founding charter of the Hague court, as well as over a dozen other international treaties and conventions.

“We want to complain to this organization,” he said, referring to the court. “As long as there is no peace, and the world doesn’t prioritize peace in this region, this region will live in constant conflict. The Palestinian cause is the key issue to be settled.”

As expected, the decision elicited an angry response from Israel. “The one who needs to fear the International Criminal Court in the Hague is the Palestinian Authority, which has a unity government with Hamas, a terror organization like (the Islamic State group) which commits war crimes,” Prime Minister Benjamin Netanyahu said in a statement.

According to the Associated Press, Netanyahu called Israel's soldiers “the most moral army in the world” and said the country would take unspecified “retaliatory steps.”

The AP noted that “turning to the International Criminal Court marks a major policy shift by transforming Abbas' relations with Israel from tense to openly hostile. Abbas has been threatening to join the court since 2012, but held off under American and Israeli pressure. The Palestinians can use the court to challenge the legality of Israeli settlement construction on occupied lands and to pursue war crimes charges connected to military activity.”

The State Department criticized the move as well. In a statement issued Wednesday, it said it was “deeply troubled by today’s Palestinian action regarding the ICC,” and called it “an escalatory step that will not achieve any of the outcomes most Palestinians have long hoped to see for their people.” More