It is impossible to overstate the significance of the High Court of Justice ruling ordering the state to demolish within two years the Amona illegal outpost, which was built on private Palestinian land. After years of evasion, legal tricks, forged documents and unfulfilled pledges, even the High Court came to realize that the state cannot be trusted, not to mention the settlers, to voluntarily agree to return the land they plundered from their owners. 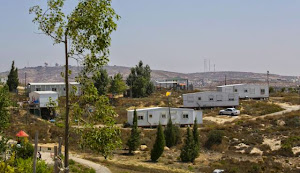 Amona was born in sin in 1997, when a group of settlers established residence in an area that had been earmarked for an archaeological site and a Mekorot Water Company reservoir. Cease and desist orders issued by Civil Administration inspectors in 2004 halted building for four years, but it resumed in force despite new stop-work orders.

In 2006, after the High Court ordered the demolition of Amona’s permanent structures, the settlers made clear that they were not bound by the court’s authority and they turned the “battle for Amona” into a national event in which they violently confronted the police. If there was no alternative to demolition, they would make Amona a “national trauma” that would threaten any future plans to evacuate outposts or settlements.

Even now, after the High Court ruling, the settler leaders are adamant: “We swear today to fight this with all our might,” Amona spokesman Avihai Boaron said. This is nothing but a continuation of the settlers’ common view that the state and its institutions are their servants, and when they do not fulfill their mission they must be fought. Particularly infuriating is the idea that “the left-wing government and the High Court are leading the country”; That is, in the struggle between land theft and the law, the High Court is not only a legal and ideological enemy but it also violates the political reality in which the right wing is in control. That perception is no less distorted and dangerous than the settlers’ position that the theft of Palestinian land is part of the Redemption.

The government of Israel cannot continue to avoid carrying out the High Court’s ruling, according to which “there is no possibility of authorizing the construction, even retroactively,” — a recognition of the tricks the cabinet could try. Two years is sufficient time to find alternative housing, and it would be best not to not wait until the last moment. The Palestinian landowners have waited too many years for the Israeli wheels of justice to turn. They have the right to have their property returned to them, with appropriate compensation. More