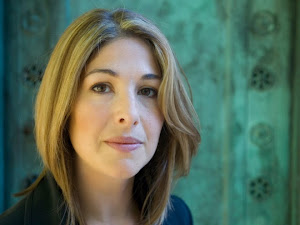 “I think what these films tell us is that we’re taking a future of environmental catastrophe for granted,” Klein says in Episode 129 of the Geek’s Guide to the Galaxy podcast. “And that’s the hardest part of my work, actually convincing people that we’re capable of something other than this brutal response to disaster.”

Her new book, This Changes Everything: Capitalism vs. The Climate, argues that only dramatic policy shifts can avert climate catastrophe, and that ordinary people need to speak up and demand emissions caps, public transportation, and a transition to renewable energy. That’s a hard sell politically, which is why dubious measures like geoengineering and cap-and-trade have been proposed instead.

But things are starting to change, with indigenous groups winning lawsuits to block drilling on their land, local communities coming together to ban fracking and establish solar energy grids, and a growing divestment campaign seeking to shame and isolate the fossil fuel industry. Many of these movements are being led by young activists like Anjali Appadurai, who gave a speech in 2010 pointing out that the United Nations has been fruitlessly debating climate change action since before she was born.

“Young people have a critical role to play because they’ll be dealing with the worst impacts of climate change,” says Klein. “And when young people find their moral voice in this crisis, it’s transformative.”

Listen to our complete interview with Naomi Klein in Episode 129 of the Geek’s Guide to the Galaxy podcast (above), and check out some highlights from the discussion below.

Naomi Klein on how the wealthy are preparing for climate change:

“There are a lot of examples of ways that companies are preparing. The most insidious is the way that oil companies—who have been funding climate change denial—are simultaneously exploring all the wonderful extraction opportunities there are because the arctic ice is melting, so they obviously know it’s happening. … After Superstorm Sandy, there was a big uptick in the way that luxury developers in New York and elsewhere started to market themselves as being ‘disaster proof’—having their own generators, having their own ‘moats’ in a way, having their own storm barriers, and basically saying, ‘When the apocalypse comes, you’ll be safe.’ … In the aftermath of Hurricane Katrina, there was a company that was launched in Florida called HelpJet. … HelpJet was a private disaster rescue operation that literally had the slogan, ‘We’ll turn your disaster into a luxury vacation.’”

“In general the geoengineering world is populated by very overconfident, overwhelmingly male figures who don’t make me feel at all reassured that they have learned the lessons of large-scale technological failure. When I went to this one conference that was hosted by the Royal Society in England, the Fukushima disaster had just started, and in fact a photographer I was working with—a videographer—had just come back from Fukushima and was completely shell-shocked. And I was surprised it didn’t come up the whole time we were meeting, because it seemed relevant to me. Yeah, we humans screw up. BP had been two years earlier. I have been profoundly shaped as a journalist by covering the BP disaster, the derivatives failure, seeing what’s happened in Fukushima. I’m sorry, but I think the smartest guys in the room screw up a lot. And the kind of hubris that I’ve seen expressed from the ‘geo-clique,’ as they’ve been called, makes me not want to scale up the risks that we’re taking.”

Naomi Klein on our relationship with nature:

“If you go back and look at the way fossil fuels were marketed in the 1700s, when coal was first commercialized with the Watt steam engine, the great promise of coal was that it liberated humans from nature, that you no longer had to worry about when the wind blew to sail your ship, and you no longer had to build your factory next to a waterfall or rushing rapids in order to power your water wheel. You were in charge, that was the promise of coal. It was the promise of man transcending the natural world. And that was, it turns out, a lie. We never transcended nature, and that I think is what is so challenging about climate change, not just to capitalism but to our core civilizational myth. Because this is nature going, ‘You thought you were in charge? Actually all that coal you’ve been burning all these years has been building up in the atmosphere and trapping heat, and now comes the response.’ … Renewable energy puts us back in dialog with nature. We have to think about when the wind blows, we have to think about where the sun shines, we cannot pretend that place and space don’t matter. We are back in the world.”

“This boom in cli-fi literature is exciting, but I think it can become dangerous if it isn’t seen as a warning, but just seen as inevitable. I think Margaret Atwood—not to be too Canadian about it—but I think Margaret Atwood’s In the Year of the Flood and that whole trilogy, that whole climate trilogy, is an example of the kind of narrative that really does serve as clarion warning, as opposed to just sort of hopeless ‘we’re on this road, we can’t get off.’ And it’s hard to define what makes something more of a warning than just affirming that sense of the inevitable. I loved Ursula Le Guin‘s acceptance speech at the Booker awards this year. I’m a huge Ursula Le Guin fan, and I think she’s one of the few science fiction writers that has pulled off utopian fiction well. She’s done both. But when she accepted the award she sort of accepted on behalf of the genre, and talked about how important it is to have and nurture voices from people who can imagine different worlds.”