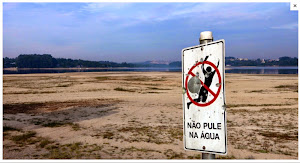 This is the first time the state has resorted to using the reserves, experts say.

“If we take into account the same pattern of water extraction and rainfall that we've seen so far this month – and it's been raining less than half of the average – we can say the (reserve) will last up to 60 days,” said Marussia Whately, a water resources specialist at environmental NGO Instituto Socioambiental.

But an expected increase in water usage during the upcoming Christmas and New Year's holidays could easily reduce the time the reserve will last, she added.

After that period, there is no certainty over the water supply available to Brazil's wealthiest city and financial center, Whately said.

If rain doesn't replenish the Cantareira system – the main group of reservoirs that supply São Paulo – the city could run dry, she said.

A third and final technical reserve might be used, but it is difficult to access and mixed with silt that could make pumping it to users difficult, according to Vicente Andreu, the president of the water regulatory agency ANA.

“I believe that, technically, it would be unviable. But if it doesn't rain, we won't have an alternative but to get water from the mud,” Andreu said at a hearing about the water crisis in Brasilia's Lower House of Congress on Nov. 13.

Brazil's southeast region is suffering its worst drought in at least 80 years after an unusually dry year left rivers and reservoirs at critically low levels.

Antonio Nobre, a leading climate scientist at INPE, Brazil's National Space Research Institute, has linked Brazil's worsening drought to global warming and deforestation in the Amazon. Both are drastically reducing the release of billions of liters of water by rainforest trees, which reduces rainfall further south, he said.

Poor planning and a lack of investment to boost reservoir capacity also have left São Paulo teetering on the brink of disaster, experts say.

A presidential election in October, which pitted the governing Workers Party (PT) against the opposition Social Democracy Party (PSDB), led São Paulo Governor Geraldo Alckmin of the PSDB to delay taking action on the water shortage – such as ordering mandatory rationing – for fear of losing votes during his reelection campaign, experts say.

Now some fear changes are coming too late for São Paulo. Alckmin has pledged to invest 3.5 billion reais ($1.4 billion) to build new reservoirs and improve distribution – but most of the work won't be completed for at least a year.

Brazil's government has treated the crisis as a temporary problem that would likely go away with the first heavy rains of the summer, rather than a sign of potentially longer-term problems with water security, Andreu said.

He has criticized the government's response to the crisis and its inaction when scientists last year started to warn about a potentially devastating drought in 2014.

Now politicians admit there is a crisis, and they are finally taking action.

The states of São Paulo, Rio de Janeiro and Minas Gerais, where more than half of Brazil's GDP is produced, on Nov. 27 agreed on works to divert water from the main river that supplies Rio de Janeiro to reservoirs in São Paulo.

Civil society organisations are pressing the government to take more radical action, such as mandatory rationing.

The Alliance for Water, a growing group of NGOs that includes Greenpeace, The Nature Conservancy and WWF, is demanding a plan to prepare for next year's dry season, which starts in April.

“We are starting 2015 with a serious deficit that won't be resolved this summer, so we must start thinking about what to do in April, when the dry season begins and we won't have any more technical reserves to use,” said Whately, who is coordinating the Alliance for Water.

That reserve started to run out in the second half of October, and reservoirs reached just 3 percent of their capacity on Oct. 21.

State-owned Sabesp was then allowed to tap a second emergency reserve, of 106 billion liters, lifting reservoir capacity above 10 percent.

But now, just weeks after this second emergency supply started to be used, water levels at the Cantareira reservoirs are once again below 10 percent, according to the company.

The third reserve, with 200 billion liters of water, is the deepest, and is located in smaller reservoirs and in passageways that connect reservoirs, which are harder to tap. Unlike the water in the reservoirs, which are drawn by gravity, the reserves water must be pumped out, according to ANA's Andreu. (Reporting by Adriana Brasileiro, editing by Laurie Goering) More