A recently discovered form of carbon graphite – the material in pencil lead – has turned out to have a completely unexpected property which could revolutionise the development of green energy and electric cars. 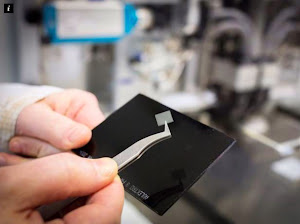 Researchers have discovered that graphene allows positively charged hydrogen atoms or protons to pass through it despite being completely impermeable to all other gases, including hydrogen itself.

The implications of the discovery are immense as it could dramatically increase the efficiency of fuel cells, which generate electricity directly from hydrogen, the scientists said.

The breakthrough raises the prospect of extracting hydrogen fuel from air and burning it as a carbon-free source of energy in a fuel cell to produce electricity and water with no damaging waste products.

“In the atmosphere there is a certain amount of hydrogen and this hydrogen will end up on the other side [of graphene] in a reservoir. Then you can use this hydrogen-collected reservoir to burn it in the same fuel cell and make electricity,” said Professor Sir Andrei Geim of Manchester Univeristy.

Ever since its discovery 10 years ago, graphene has astonished scientists. It is the thinnest known material, a million times thinner than human hair, yet more than 200 times stronger than steel, as well as being the world’s best conductor of electricity.

Until now, being permeable to protons was not considered a practical possibility, but an international team of scientists led by Sir Andre, who shares the 2010 Nobel Prize for his work on graphene, has shown that the one-atom thick crystal acts like a chemical filter. It allows the free passage of protons but forms an impenetrable barrier to other atoms and molecules.

“It’s just so dense an electronic field it just doesn’t let anything through. But it’s a question of numbers, no more than that. This makes a difference between billions of years and a reasonable time for permeation. There is no magic,” he said.

The study, published in the journal Nature, shows that graphene and a similar single-atom material called boron nitride allowed the build-up of protons on one side of a membrane, yet prevented anything else from crossing over into a collecting chamber.

In their scientific paper, the researchers speculate that there could be many applications in the field of hydrogen fuel cells and in technology for collecting hydrogen gas from the atmosphere, which would open up a new source of clean energy.

“It’s really the very first paper on the subject so what we’re doing is really to introduce the material for other experts to think about it,” Sir Andrei said.

“It was difficult not to speculate. If you can pump protons from a hydrogen-containing gas into a chamber that doesn’t contain anything, you start thinking how you can exploit this?” he said.

“One of the possibilities we can imagine, however futuristic, which has to be emphasised because everything has been shown on a small scale, is applying a small electric current across the membrane and pushing hydrogen though the graphene or boron nitrite membrane,” he explained.

“Essentially you pump your fuel from the atmosphere and get electricity out of this fuel, in principle. Before this paper, this wouldn’t even be speculation; it would be science fiction. At least our paper provides a guidance and proof that this kind of device is possible and doesn’t contradict to any known laws of nature,” Sir Andre added.

Graphene is tough, about 200 times stronger than steel, yet incredibly light. It is considered the first two-dimensional material because it forms sheets of crystal that are just one atom thick.

It is also an excellent conductor of electricity, so is useful for anything involving electronics, such as bendable mobile phones and cameras, and wearable electrical devices attached to clothing.

Medical applications include its possible use as a material for delivering drugs to damaged sites within the body, which could open new avenues for treating patients with brain conditions such as Parkinson’s disease or cancer.

Graphene is also being developed as a new material for membranes involved in separating liquids. It could be used to purify water in the developing world or to create more efficient desalination plants.

Scientists also believe that graphene’s high strength and low weight can be harnessed in the making of new composite materials and polymers for the transport industry, making travel safer and more fuel efficient.

Now, it seems, graphene might also be used to generate new forms of generating clean electricity using hydrogen fuel cells, and even as a technology for harvesting hydrogen fuel from air. More