Bangkok, 17 November 2014 – President of Palau, Tommy Remengesau, Jr, was announced as a winner of the UN’s top environmental accolade, the Champions of the Earth award. 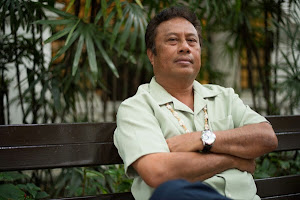 The Policy Leadership award, which has been won in previous years by European Commissioner for the Environment, Dr. Potocnik, and Brazil’s Environment Minister, Izabella Teixeira, will be awarded to President Remengesau by UN Secretary-General Ban-Ki-moon and UNEP Executive Director Achim Steiner at an awards ceremony attended by UNEP Goodwill Ambassador Gisele Bundchen at the Smithsonian American Art Museum and National Portrait Gallery in Washington D.C. on 19 November 2014.

Tommy Remengesau, President of Palau, said, “I am honored to receive this award on behalf of the traditional leaders, the people of Palau, and the islanders around the world, who are the stewards for the protection of our vast oceans and natural wealth.”

“As a fisherman, I have seen first-hand the devastating impacts of overfishing, climate change and pollution on our oceans. As the leader of an island country, I know we have the solutions to tackle these issues. We need to stand together to take action now to protect our oceans and our Mother Earth for our generation and future children.”

Under the leadership of President Remengesau, Palau is showing the way to protect its invaluable natural resources while balancing the needs and traditions of its people. Earlier this year the President announced the world’s first Nation-wide Marine Sanctuary that fully protects over 80 per cent of Palau’s 600,000 sq km of Exclusive Economic Zone.

The Sanctuary bans industrial and foreign fishing as well as exports, while establishing a local fishing zone for domestic use. This is a bold step to reverse degradation of the ocean and stands to ignite further global action on oceans.

The President has demonstrated the country’s capacity to successfully meet its conservation goals, having established a network of protected areas representing more than 50 per cent of marine and 20 per cent of terrestrial areas through the Micronesia Challenge. This was largely funded by a “Green Fee” where tourists pay US$30 on departure from Palau, generating more than US$1.3 million annually for conservation.

The President has spearheaded a range of local to global initiatives, from the world’s first shark sanctuary to establishing the Global Island Partnership alongside President Michel of Seychelles, which has inspired more than 30 leaders to launch major sustainable island commitments.

“Supporting President Remengesau – and other leaders of other small island nations – on this journey of transition, provides an unprecedented opportunity to be part of game-changing solutions that can be applied in broader contexts and bigger economies.”

“In short, we should look upon small island nations like Palau as microcosms of our larger society, and not stand back and leave them to grapple with threats – such as climate change.”

Champions of the Earth is the United Nations’ flagship environmental award launched in 2005 that recognizes outstanding visionaries and leaders in the fields of policy, science, entrepreneurship, and civil society action. Whether by helping to improve the management of natural resources, demonstrating new ways to tackle climate change or raising awareness of emerging environmental challenges, Champions of the Earth should serve as an inspiration for transformative action across the world. Past laureates have included past laureates Mikhail Gorbachev, Al Gore, Felipe Calderon, Mohamed Nasheed, Marina Silva, Vinod Khosla, and many other such exemplary leaders on the environment and development front.