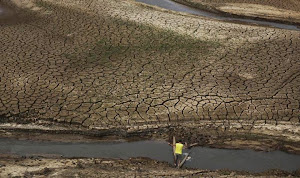 “It's a major cause for concern because most of the places where it (ground water depletion) is happening are major food producing regions,” James Famiglietti, a University of California professor who conducts research for the National Aeronautics and Space Administration (NASA), said in an interview with the Thomson Reuters Foundation.

“India is the worst off, followed by the Middle East, and the U.S. is probably number three … the Chinese, particularly on the north China plain, are more water limited than people believe.”

Famiglietti's conclusions are based on his latest research paper “The global ground water crisis” published in the journal Nature Climate Change last month.

The study uses analysis of satellite images to warn that ground water in many of the world's largest aquifers is being exploited at a far faster rate than it can be naturally replenished.

Farming accounts for more than 80 percent of the United States' water use, according to the U.S. Department of Agriculture, and the figures are similar globally.

Famiglietti has been called to the Pentagon a number of times to discuss the potential impact of groundwater scarcity with leading military planners.

Water-related conflicts are already happening, he said, and security experts are bracing for more.

“In 90 percent of the world where there are violent conflicts, there are water scarcity issues,” he said.

Water scarcity has been one component driving Syria's civil war, he said. The agricultural sector lacks sufficient water to farm, and a “young generation of unhappy farmers moved to the city and conflict ensued”.

Oil-rich, water scarce countries in the Gulf currently rely on desalinated sea water for much of their water consumption.

Famiglietti said this would not be a good option, as it requires too much energy, and won't be able to efficiently provide the volumes of water needed for large-scale agriculture.

Governments first need to acknowledge there is a problem, he said, and then factor scarcity into pricing, while investing in conservation and new technologies to promote efficiency. More