The main finding of this paper is that there is limited scope for significantly reducing overall European dependence on Russian gas before the mid-2020s. 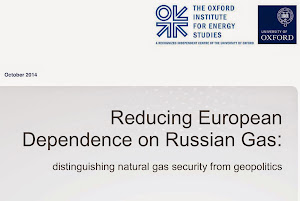 However, countries in the Baltic region and south-eastern Europe which are highly dependent on Russian gas, and hence extremely vulnerable to interruptions, could substantially reduce and even eliminate imports of Russian gas by the early 2020s, by a combination of LNG supplies and pipeline gas from Azerbaijan. Similar measures could reduce (but not eliminate) the dependence of central Europe and Turkey on Russian gas. In the majority of countries, there is limited scope to reduce gas with oil products, and to the extent that it is replaced by coal in power generation carbon emissions will increase significantly.

Up to the mid-2020s, European companies are contractually obliged to import at least 115 bcm/year of Russian gas (approximately 75 per cent of the 2013 import level), a figure which reduces to around 65 bcm by 2030. Even if long-term contracts disappear, our modelling shows a requirement of at least 100 bcm/year of Russian gas up to 2030, and in some scenarios up to twice that volume. The main additional source of non-Russian gas for Europe up to 2030 will be LNG; pipeline gas imports from domestic and other imported sources are not envisaged to increase substantially and may decline. Russian gas deliveries to Europe will be highly competitive with all other pipeline gas and LNG (including US LNG) supplies throughout the period to 2030, and Gazprom's market power to impact European hub prices may be considerable.

Countries with strong geopolitical fears related to Russian gas dependence will need to either terminate, or not renew on expiry, their long-term contracts with Gazprom. This will result in substantial additional infrastructure costs for LNG import terminals and pipeline connections, or investments in alternative energy sources, energy conservation, and efficiency measures.

Whatever the political relationship between Russia, the European Union, and individual European countries, a continued natural gas relationship will be necessary and needs to be carefully managed. The most immediate problems are: a resolution of the Ukrainian transit situation, and a successful conclusion of the EU's regulatory treatment of the South Stream pipeline. Once the immediate crisis has passed, both sides need to discuss the future role of gas in EU energy balances, together with its potential contribution to the EU's ambitious carbon reduction targets. Download PDF