In a report released on Friday, Amnesty International roundly condemns the excessive force used by local law enforcement agencies in Ferguson, Missouri earlier this year and called for ‘accountability and systemic change’ in order to curb the kinds of human rights abuses increasingly seen in U.S. communities when it comes to regulating street protests and use of force by police. 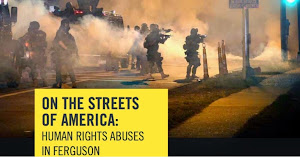 The report—entitled On the Streets of America: Human Rights Abuses in Ferguson (pdf)—documents the human rights concerns witnessed first-hand by Amnesty investigators dispatched to Ferguson following initial protests in the city spurred by the shooting death of an unarmed African American teenager, Michael Brown, by a police officer Darren Wilson on August 9. The Amnesty team arrived and documented public protest and the behavior of local law enforcement from August 14 to August 22.

Amnesty’s report makes takes no position or determination on the killing of Brown, but says the shooting and his death “highlighted on a national level the persistent and widespread pattern of racially discriminatory treatment by law enforcement officers across the United States, including unjustified stops and searches, ill treatment and excessive, and sometimes lethal, use of force.”

Focused on both the community response to Brown’s death and the subsequent police reaction to protests, the report’s authors present what they witnessed first-hand in Ferguson in order to highlight some of the national trends of human rights abuses that often, though with less attention, take place in U.S. communities.

“What Amnesty International witnessed in Missouri on the ground this summer underscored that human rights abuses do not just happen across borders and oceans,” said Steven W. Hawkins, executive director of Amnesty International USA. “No matter where you live in the world, everyone is entitled to the same basic rights as a human being – and one of those rights is the freedom to peacefully protest. Standing on W. Florissant Avenue with my colleagues, I saw a police force, armed to the teeth, with military-grade weapons. I saw a crowd that included the elderly and young children fighting the effects of tear gas. There must be accountability and systemic change that follows this excessive force.”

According to the report:

The rights of peaceful assembly, freedom of association and freedom of expression are basic human rights. These rights are also guaranteed under the Constitution of the United States and the laws of the state of Missouri. The vast majority of those participating in the demonstrations in Ferguson that spontaneously grew in the days and weeks following the shooting Michael Brown have been peaceful – as noted by government officials such as the President of the United States, the Governor of Missouri and Attorney General along with the Missouri Highway Patrol. However, the responses by state officials and law enforcement to the violent actions of a limited number of protestors have impacted the rights of all participating in peaceful protests.

Overall, said Hawkins, “This is about accountability.”

“The events in Ferguson sparked a much-needed and long-overdue conversation on race and policing in America,” he said. “That conversation cannot stop. In order to restore justice to Ferguson, and every community afflicted by police brutality, we must both document the injustices committed and fight to prevent them from happening again. There is a path forward, but it requires substantive actions on the local, state and federal levels.”

In addition to documenting the abuses witnessed in Ferguson, the Amnesty report also puts forth a series of recommendations for local, state, and national agencies that include: better policies on use of force: calling for a thorough and transparent investigation into Brown’s death; improved policing standards of public protests; and a plea to end the unnecessay militarization of local police departments. More