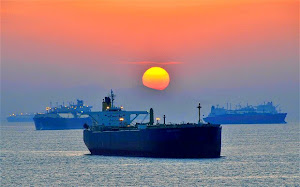 Oil prices ended last week in freefall as the world’s largest group of producers from petro-states in the Middle East dithered over whether to cut output.

A secretive group of the world’s most powerful oil ministers will soon gather in Vienna to take arguably one of the most important decisions that could affect the still fragile world economy: whether to cut production of crude to defend prices at $100 per barrel, or keep open the spigots as winter looms among the biggest energy-consuming nations?

A sudden slump in the price of crude has exposed deep divisions within the Organisation of Petroleum Exporting Countries (Opec) ahead of its final scheduled meeting of the year next month to decide on how much oil to pump. 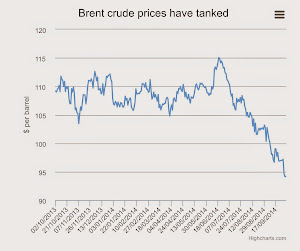 Some members, led by Iran, have called for immediate action to stem the drop in oil prices, while the Arab sheikhdoms of the Gulf have so far argued that it could be another three months before it becomes clear whether the group should cut production for the first time since December 2008.

Whatever they decide, oil remains the lifeblood of the global economic system due to its direct impact on inflation and input prices. Brent crude – a global benchmark of oil drawn from 15 fields in the North Sea, dipped last week to multi-year lows below $92 per barrel as a perfect storm of a strong US dollar, oversupply in the system and declining demand shattered confidence in the market. Brent has tumbled 20pc in the last three months after touching $115 per barrel in June.

In the US – the world’s biggest consumer – crude for November delivery at one point last week dropped below the psychologically important $90 pricing level, raising fears that a prolonged slump could put many of America’s shale drillers out of business. Shale oil, which can cost up to $80 per barrel to produce, has spurred an energy revolution in the US, which has started to threaten the dominance of producers in the Middle East.

However, at current price levels many of these new so called “tight oil” wells are approaching the point when they will soon become unprofitable.

Like the situation in the US, falling oil prices are also a double-edged sword for Britain’s economy and investors. Although George Osborne, the Chancellor, is less reliant on tax revenues from the North Sea than some of his predecessors, prices are approaching the point when many of the developments planned offshore west of Shetland by international oil companies could be placed on ice.

A sharp drop-off in domestic oil production and associated tax receipts from the North Sea would give Mr Osborne an unwelcome hole to fill in the government’s public finances heading into next year’s general election. However, falling oil prices will help to keep inflation low.

For Britain’s motorists the current declines have been good news that has trickled through to the price of petrol on forecourts. A litre of unleaded petrol in the UK has fallen a few pence over the past month to an average of around 127.21p on average, a figure last seen in 2011, just before Mr Osborne raised the value added tax on fuel to 20pc, from 17.5pc.

All eyes are now firmly focused on the next move by Opec, which controls 60pc of the world’s oil reserves and about a third of daily physical supply. The group has been branded an unaccountable “cartel” by free-market critics in North America who claim its system of limiting production by setting an output ceiling and quotas is tantamount to price rigging.

Although this is an accusation that the group’s secretariat which is based in Vienna strongly denies, its mostly unelected group of policymaking oil ministers undeniably pull the strings of the global energy industry in the same way that central bankers can control currencies.

Opec states have largely managed to maintain cohesion over the last decade as prices over $100 per barrel have enriched their economies and encouraged adherence to quotas. This consensus is now starting to break down, creating more uncertainty in the market and a potentially destabilising situation for the global economy. 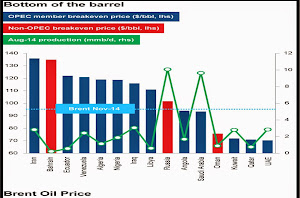 Next month’s meeting promises to be the most tense held since the onset of the Arab Spring in 2010, with the Shi’ite Muslim faction of Iran and Iraq already appearing to line up against Saudi Arabia and the United Arab Emirates (UAE).

Iran’s Oil Minister Bijan Zanganeh has placed his cards on the table early by calling for Opec to urgently cut output to stem the sharp recent decline in prices, which threatens the Islamic Republic’s fragile economy after years of restrictive sanctions.

According to research from Deutsche Bank, Iran has the highest fiscal break-even price for its budget at over $130 per barrel of Brent, compared with the UAE at around $70 per barrel and Saudi Arabia at about $90. More