Solar energy could be the top source of electricity by 2050, aided by plummeting costs of the equipment to generate it, a report from the International Energy Agency (IEA), the West’s energy watchdog, said on Monday. 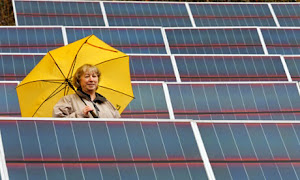 IEA Reports said solar photovoltaic (PV) systems could generate up to 16% of the world’s electricity by 2050, while solar thermal electricity (STE) – from “concentrating” solar power plants – could provide a further 11%.

“The rapid cost decrease of photovoltaic modules and systems in the last few years has opened new perspectives for using solar energy as a major source of electricity in the coming years and decades,” said IEA Executive Director Maria van der Hoeven.

Solar photovoltaic (PV) panels constitute the fastest-growing renewable energy technology in the world since 2000, although solar is still less than 1% of energy capacity worldwide.