Computer giant IBM last week revealed the prototype of its advanced solar electricity generators: a 30ft-high concrete “sunflower” fitted with wafer-thin aluminium mirrors and a maze of tiny tubes for carrying coolant through the heart of each device. 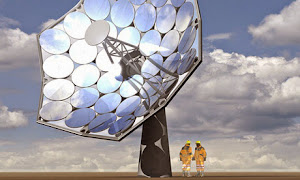 The machines, which will be built in conjunction with the Swiss company Airlight Energy, can convert 80% of the sun’s radiation into electricity and hot water, it is claimed, with each generating 12 kilowatts of electricity and 20kW of heat on a sunny day, enough to supply several homes.

At the device’s official unveiling in Zurich, executives for both companies said they hoped that by 2017, when their sunflower generators should be ready for the market, they could be manufactured for half to one-third of the cost of comparable solar converters today. According to IBM, the machine’s secret lies with the microscopic tubes that carry water through the cluster of photovoltaic chips at the heart of each device. This system has already been adopted by IBM to cool its high-performance supercomputers. “We were inspired by the branched blood supply of the human body,” said Bruno Michel, from the IBM Research laboratories in Zurich.

The sunflower operates by tracking the sun so that it always points in the best direction for collecting its rays; these are then focused on to a cluster of photovoltaic cells that are mounted on a raised platform. The cells convert solar radiation into electricity. However, without the microchannel cooling system, which carries distilled water through the chips, temperatures would reach more than 1,000C. With the microcooling system, which carries water to within a few millimetres of the back of each chip, temperatures are kept down to 90C – a far safer, and far more efficient, operating level. Electricity is generated while the system also produces large amounts of hot water from the cooling system. “That hot water is a game changer,” added Michel. “Electricity is obviously vitally useful but so is the heat – for we can use it for desalinating water.”

At present, about 1.3 billion people have no access to electricity. However, that figure is dwarfed by the number – 2.5 billion – who have no access to proper sanitation. And according to figures supplied by Airlight Energy, that latter number is currently increasing at a rate of 9% a year. However, the IBM-Airlight sunflower is designed to tackle both problems. The electricity will have numerous uses while the hot water can be pumped through desalinators that use porous membranes to boil salt water and distil the result into pure, drinkable water. A large installation made up of several generators could provide enough fresh water for an entire town, it was claimed at last week’s launch.

Apart from sites in Africa, the Middle East and Australia, it is hoped the sunflower system will be used for remote hospitals, hotels and holiday resorts. IBM says it will instal its first two devices for free in 2016 and has asked towns around the world to put their names forward to be the first to have a solar sunflower erected on their land. More