The following is an excerpt taken from the introduction of Naomi Klein's newly published book, This Changes Everything: Capitalism vs. the Climate, and appears at Common Dreams with permission from the book's publisher Simon & Shuster. All rights reserved. 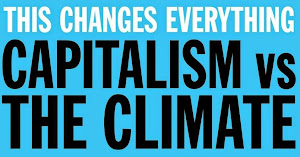 “Most projections of climate change presume that future changes—greenhouse gas emissions, temperature increases and effects such as sea level rise—will happen incrementally. A given amount of emission will lead to a given amount of temperature increase that will lead to a given amount of smooth incremental sea level rise. However, the geological record for the climate reflects instances where a relatively small change in one element of climate led to abrupt changes in the system as a whole. In other words, pushing global temperatures past certain thresholds could trigger abrupt, unpredictable and potentially irreversible changes that have massively disruptive and large-scale impacts. At that point, even if we do not add any additional CO2 to the atmosphere, potentially unstoppable processes are set in motion. We can think of this as sudden climate brake and steering failure where the problem and its consequences are no longer something we can control.” —Report by the American Association for the Advancement of Science, the world’s largest general scientific society, 2014

I denied climate change for longer than I care to admit. I knew it was happening, sure. Not like Donald Trump and the Tea Partiers going on about how the continued existence of winter proves it’s all a hoax. But I stayed pretty hazy on the details and only skimmed most of the news stories, especially the really scary ones. I told myself the science was too complicated and that the environmentalists were dealing with it. And I continued to behave as if there was nothing wrong with the shiny card in my wallet attesting to my “elite” frequent flyer status

Climate change is… hard to keep it in your head for very long. We engage in this odd form of on-again-off-again ecological amnesia for perfectly rational reasons. We deny because we fear that letting in the full reality of this crisis will change everything. And we are right.”

A great many of us engage in this kind of climate change denial. We look for a split second and then we look away. Or we look but then turn it into a joke (“more signs of the Apocalypse!”). Which is another way of looking away.

Or we look but tell ourselves comforting stories about how humans are clever and will come up with a technological miracle that will safely suck the carbon out of the skies or magically turn down the heat of the sun. Which, I was to discover while researching this book, is yet another way of looking away.

“Climate change is… hard to keep it in your head for very long. We engage in this odd form of on-again-off-again ecological amnesia for perfectly rational reasons. We deny because we fear that letting in the full reality of this crisis will change everything. And we are right.”

Or we look but try to be hyper-rational about it (“dollar for dollar it’s more efficient to focus on economic development than climate change, since wealth is the best protection from weather extremes”)—as if having a few more dollars will make much difference when your city is underwater. Which is a way of looking away if you happen to be a policy wonk. Or we look but tell ourselves we are too busy to care about something so distant and abstract—even though we saw the water in the subways in New York City, and the people on their rooftops in New Orleans, and know that no one is safe, the most vulnerable least of all. And though perfectly understandable, this too is a way of looking away.

Or we look but tell ourselves that all we can do is focus on ourselves. Meditate and shop at farmers’ markets and stop driving—but forget trying to actually change the systems that are making the crisis inevitable because that’s too much “bad energy” and it will never work. And at first it may appear as if we are looking, because many of these lifestyle changes are indeed part of the solution, but we still have one eye tightly shut.

Or maybe we do look—really look—but then, inevitably, we seem to forget. Remember and then forget again. Climate change is like that; it’s hard to keep it in your head for very long. We engage in this odd form of on-again-off-again ecological amnesia for perfectly rational reasons. We deny because we fear that letting in the full reality of this crisis will change everything. And we are right.

We know that if we continue on our current path of allowing emissions to rise year after year, climate change will change everything about our world. Major cities will very likely drown, ancient cultures will be swallowed by the seas, and there is a very high chance that our children will spend a great deal of their lives fleeing and recovering from vicious storms and extreme droughts. And we don’t have to do anything to bring about this future. All we have to do is nothing. Just continue to do what we are doing now, whether it’s counting on a techno-fix or tending to our gardens or telling ourselves we’re unfortunately too busy to deal with it.

All we have to do is not react as if this is a full-blown crisis. All we have to do is keep on denying how frightened we actually are. And then, bit by bit, we will have arrived at the place we most fear, the thing from which we have been averting our eyes. No additional effort required.

There are ways of preventing this grim future, or at least making it a lot less dire. But the catch is that these also involve changing everything. For us high consumers, it involves changing how we live, how our economies function, even the stories we tell about our place on earth. The good news is that many of these changes are distinctly un-catastrophic. Many are downright exciting. But I didn’t discover this for a long while.

“All we have to do is not react as if this is a full-blown crisis. All we have to do is keep on denying how frightened we actually are. And then, bit by bit, we will have arrived at the place we most fear, the thing from which we have been averting our eyes. No additional effort required.”

I remember the precise moment when I stopped averting my eyes to the reality of climate change, or at least when I first allowed my eyes to rest there for a good while. It was in Geneva, in April 2009, and I was meeting with Bolivia’s ambassador to the World Trade Organization (WTO), who was then a surprisingly young woman named Angélica Navarro Llanos. Bolivia being a poor country with a small international budget, Navarro Llanos had recently taken on the climate portfolio in addition to her trade responsibilities. Over lunch in an empty Chinese restaurant, she explained to me (using chopsticks as props to make a graph of the global emission trajectory) that she saw climate change both as a terrible threat to her people—but also an opportunity.

A threat for the obvious reasons: Bolivia is extraordinarily dependent on glaciers for its drinking and irrigation water and those white-capped mountains that tower over its capital were turning gray and brown at an alarming rate. The opportunity, Navarro Llanos said, was that since countries like hers had done almost nothing to send emissions soaring, they were in a position to declare themselves “climate creditors,” owed money and technology support from the large emitters to defray the hefty costs of coping with more climate-related disasters, as well as to help them develop on a green energy path.

She had recently given a speech at a United Nations climate conference in which she laid out the case for these kinds of wealth transfers, and she gave me a copy. “Millions of people,” it read, “in small islands, least developed countries, landlocked countries as well as vulnerable communities in Brazil, India and China, and all around the world—are suffering from the effects of a problem to which they did not contribute. . . . If we are to curb emissions in the next decade, we need a massive mobilization larger than any in history. We need a Marshall Plan for the Earth. This plan must mobilize financing and technology transfer on scales never seen before. It must get technology onto the ground in every country to ensure we reduce emissions while raising people’s quality of life. We have only a decade.” More