ON SEPTEMBER 23rd 120-odd presidents and prime ministers will gather in New York for a UN meeting on climate change. It is the first time the subject has brought so many leaders together since the ill-fated Copenhagen summit of 2009. 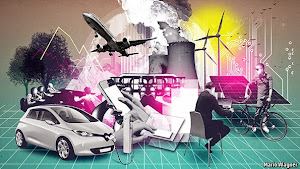 Now, as then, they will assert that reining in global warming is a political priority. Some may commit their governments to policies aimed at reducing greenhouse-gas emissions. What few will say is how many tonnes of carbon dioxide these will save—because they almost never do.

According to scientists, cutting carbon-dioxide emissions is an essential part of reducing catastrophic risks from climate change. Yet governments are persistently averse to providing estimates of how much carbon a policy saves. That may be because, in countries where climate change is controversial, it makes more sense to talk about the other benefits a scheme offers rather than its effect on carbon. Or it may be that, in countries which are enthusiastic about renewable energy, pointing out that it may not save that much carbon is seen as unhelpful. Or perhaps governments think climate change is so serious that all measures must be taken, regardless of cost (though their overall lacklustre record suggests this is not the case).

Whatever the reason, the end result is that while the world’s governments have hundreds of policies for tackling climate change, some of them very expensive—China, America and the European Union spend $140 billion a year on subsidising renewable energy—it is hard to say which policies are having the greatest effect.

So The Economist has made a stab at a global comparison of carbon-mitigation efforts. Chart 1 is the result. It ranks 20 policies and courses of action according to how much they have done to reduce the atmosphere’s stock of greenhouse gases. We have used figures from governments, the EU and UN agencies. As far as we know, this exercise has not been carried out before. 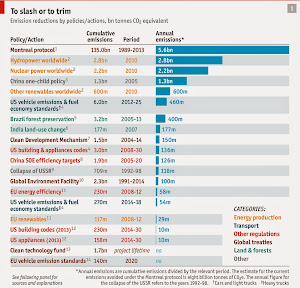 First, a health warning: the policies and actions on our list are not strictly comparable. Some are global, some regional and some national. Some are long-standing; some new. A couple are not policies at all, such as the collapse of the Soviet Union, which led to the closure of polluting factories and to inefficient state farms reverting to grassland, locking up carbon.

And the numbers almost all come with caveats. It is fairly easy to estimate how much carbon a new field full of solar cells or a nuclear-power plant saves by looking at the amount of electricity it produces in a year and how much carbon would have been emitted if fossil fuels had been used instead, based on the local mix of coal, gas and oil. But as Paul Joskow of the Massachusetts Institute of Technology has pointed out, the standard “levelised” calculations, which divide the total amount of power a plant will produce over its lifetime by its total lifetime cost, are a poor way to compare fossil fuels and renewable energy.

Other measures have problems, too. Take the effects of fuel-efficiency standards. Would companies have curtailed their cars’ emissions anyway to sell more of them to cost- and mileage-conscious drivers? And how much has better fuel efficiency encouraged drivers to drive farther?

A further complication is that many policies have benefits beyond—or indeed closer to hand than—those they offer in terms of climate. Burning less coal saves lives in the near future as well as reducing climate risks in decades to come. Saving forests preserves wildlife, not just carbon.

So our table should be treated with caution. It is only safe to say that one policy is better than another in climate terms if it beats it by a wide margin.

As it happens, though, there are some very wide margins to be found. One policy stands head and shoulders above all others. And it is one that few people other than climate-policy specialists will have thought of in this context: the Montreal protocol, a 1987 agreement to phase out substances such as chlorofluorocarbons (CFCs) used in air conditioners, refrigerators and so on. It was enacted to limit the damage such substances were doing to the ozone layer, a goal which it has achieved.

Like carbon dioxide and many other gases emitted by industry and agriculture—methane and nitrous oxide, for example—CFCs are greenhouse gases. And they are extremely potent ones, causing thousands of times more warming per molecule than carbon dioxide does. That means stopping CFC production, which was in the range of millions of tonnes a year, delivered a climate benefit equivalent to cutting carbon-dioxide emissions by billions of tonnes.

Guus Velders of the Dutch National Institute for Public Health and the Environment has compared the warming effect that would have come about if the emissions of such chemicals had continued to grow at the rate they were growing before the protocol with what has come about thanks to their banning. The net effect is equivalent to that of a whopping 135 billion tonnes of carbon dioxide. That is more than twice today’s total annual greenhouse-gas emissions, which are equivalent to about 50 billion tonnes of carbon dioxide (carbon dioxide itself makes up about three-quarters of that, with methane, nitrous oxide and some gases used in industry making up the rest). Durwood Zaelke of the Institute for Governance and Sustainable Development, a think-tank, says that if CFCs were uncontrolled the annual figure would be 8 billion tonnes higher. The Montreal protocol has had nearly as big an effect as all the rest of our list put together.

Trailing some way behind the Montreal protocol is a small group of measures—not really climate policies—that have been responsible for avoiding between 4% and 7% of greenhouse-gas emissions. According to the International Atomic Energy Agency, nuclear power avoided the production of 2.2 billion tonnes of carbon dioxide in 2010—that is, emissions would have been 2.2 billion tonnes higher if the same amount of electricity had been produced by non-nuclear plants. Energy from dams and other hydroelectric sources avoided 2.8 billion tonnes (though emissions of methane from the reservoirs behind some of those dams mean the net effects were less than that). Between them they generated 6,000 terawatt-hours of electricity in 2011, compared with 450TWhrs for wind and less than 60TWhrs for solar. The high rate at which new wind and solar capacity is being built will eat into this lead, but it will take some time to overturn it.

The other item in this group is something of a cheat. In 2007 Su Wei of China’s foreign ministry said that his country’s one-child policy, by reducing the number of births between the late 1970s and the mid-2000s by 300m, had reduced carbon emissions by 1.3 billion tonnes in 2005 (because there were fewer people to consume goods which generated greenhouse gases in their production). Taking this argument further, one could say that the fall in global fertility since 1960 cut emissions even more. That is not exactly a climate policy. But it is a reminder that greenhouse gases are powerfully influenced by factors far beyond the scope of climate-change policies.

Three other lessons emerge. First, policies to slow or reverse deforestation are more important than one might expect. Trees absorb carbon as they grow and release it when they are cut down. According to a recent study in Science, declining deforestation in Brazil meant that the country produced 3.2 billion tonnes less atmospheric carbon dioxide between 2005 and 2013 than it would have if the tree-felling had continued unabated. That is 400m tonnes a year. The slowdown in deforestation in tropical countries is one of the reasons that the conversion of forests to farmland now accounts for only 11% of greenhouse-gas emissions globally, much less than 20 years ago.

The other reason for deforestation’s dramatically reduced share of total emissions, though, is that industrial emissions of carbon dioxide have continued to grow rapidly. The rise is not as fast as it might have been. Rules that make vehicles more efficient and improve the energy efficiency of buildings and appliances have done more than might be expected. America has been setting standards for vehicle greenhouse-gas emissions and fuel efficiency since the mid 1970s; the current rules are forecast to reduce carbon-dioxide emissions by 6 billion tonnes in 2012-25, meaning by about 460m tonnes a year. America’s Department of Transportation reckons that overall such rules have reduced carbon-dioxide emissions by a cumulative 14 billion tonnes. Europe’s equivalent regulations for passenger cars and light trucks do less (European vehicles were more efficient to start with) but are still respectable; being adopted by overseas manufacturers who want to sell cars in Europe gives them an unquantified extra clout. More