An image speaks a thousand words – and that is presumably what Israel’s supporters hoped for with their latest ad in the New York Times. 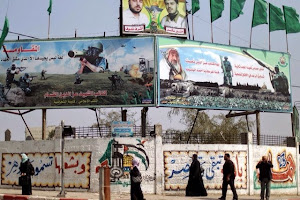 Two photographs are presented side by side. One, titled ISIL, is the now-iconic image of a kneeling James Foley, guarded by a black-hooded executioner, awaiting his terrible fate. The other, titled Hamas, is a scene from Gaza, where a similarly masked killer stands over two victims, who cower in fear.

A headline stating “This is the face of radical Islam” tries, like the images, to equate the two organisations.

We have heard this line before from Israel’s prime minister, Benjamin Netanyahu, who tweeted “Hamas is ISIL” after the video of Foley’s beheading aired. In a recent speech he called Hamas and ISIL, “tentacles of a violent Islamist terrorism”.

Mr Netanyahu’s depiction of Hamas and ISIL as “branches of the same poisonous tree” is a travesty of the truth. The two have entirely different – in fact, opposed – political projects.

Members of Hamas may disagree on that state’s territorial limits but even the most ambitious expect no more than the historic borders of a Palestine that existed decades ago. ISIL, by contrast, aims to sweep away Palestine and every other Arab state.

That is the key to interpreting the very different, if equally brutal, events depicted in the two images.

ISIL killed Foley, dressed in Guantanamo-style orange jumpsuit, purely as spectacle – a graphic message to the world of its menacing intent. Hamas’s cruelty was directed at those in Gaza who collaborate with Israel, undermining hope of liberation from Israel’s occupation.

ISIL’s 20,000 foot soldiers have taken over large chunks of Iraq and Syria in a murderous and uncompromising campaign against anyone who rejects not only Islam but their specific interpretation of it.

According to reports last week, Hamas leader Khaled Meshal joined Mr Abbas in demanding the most diminutive Palestinian state possible, inside the 1967 borders.

Mr Netanyahu, meanwhile, refuses to negotiate with either Hamas or the Palestinian Authority (PA) of Mahmoud Abbas.

In casting Hamas as ISIL, Mr Netanyahu has tarred all Palestinians as bloodthirsty Islamic extremists. And here we reach Israel’s true goal in equating the two groups.

Mr Netanyahu’s comparison has a recent parallel. Immediately after the 9/11 attacks on the US, Ariel Sharon made a similar equivalence between Al Qaeda and the late Palestinian leader Yasser Arafat.

Israel’s intelligence officials even called the destruction of the Twin Towers a “Hanukkah miracle”, a view echoed by Mr Netanyahu years later. All understood that 9/11 reframed the Oslo-inspired debate about the Palestinians needing statehood to one about an evil axis of Middle East terror.

Sharon revelled in calling Arafat the head of an “infrastructure of terror”, justifying Israel’s crushing the uprising of the second intifada.

Similarly, Mr Netanyahu’s efforts are designed to discredit all – not just the Islamic variety of – Palestinian resistance to Israel’s occupation. He hopes to be the silent partner to Barack Obama’s new coalition against ISIL.

Aaron David Miller, an adviser to several US administrations on Israeli-Palestinian negotiations, warned in Foreign Policy last week that the rise of ISIL would pose a serious setback to Palestinian hopes of statehood – a point underscored by the far greater concerns about ISIL than the Palestinians’ plight expressed by Arab League delegates at this week’s meeting in Cairo.

How Mr Netanyahu plans to follow Sharon in exploiting this opportunity was demonstrated last week, when Israeli intelligence revealed a supposed Hamas plot to launch a coup against the PA.

The interrogation of Hamas officials, however, showed only that they had prepared for the possibility of the PA’s rule ending in the West Bank, either through its collapse under Israeli pressure or through a disillusioned Mr Abbas handing over the keys to Israel.

But talk of Hamas coups has melded with other, even wilder stories, such as the claims last week from foreign minister Avigdor Lieberman that ISIL cells had formed in the West Bank and inside Israel. Defence minister Moshe Yaalon underscored this narrative by hurriedly classifying ISIL as a “proscribed” organisation.

All this fear-mongering is designed both to undermine the Palestinian unity government between Hamas and Fatah, and to sanction Israel’s behaviours by painting a picture, as after 9/11, of an Israel on the front line of a war against global terror.

“Israel’s demands for a continued Israeli presence [in the West Bank] and a lengthy withdrawal period will only harden further,” wrote Mr Miller.

In reality, Israel should share common cause with Palestinian leaders, from Fatah and Hamas, against ISIL. But, as ever, Mr Netanyahu will forgo his country’s long-term interests for a short-term gain in his relentless war to keep the Palestinians stateless. More

Jonathan Cook is an independent journalist based in Nazareth