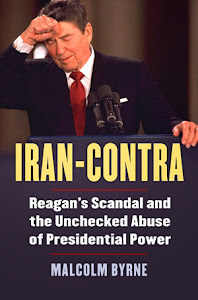 Washington, D.C., September 5, 2014 — A new book on the Iran-Contra affair shows that President Ronald Reagan stood at the epicenter of the scandal both in terms of his willingness to break the law in order to free American hostages in Lebanon and his failure to take account of the costs and consequences of his decisions, including the illicit conduct of numerous aides.

Advance praise for “Iran-Contra: Reagan’s Scandal and the Unchecked Abuse of Presidential Power” by Malcolm Byrne (University Press of Kansas, September 15, 2014), includes this from Seymour Hersh: “At last, the Reagan administration’s Iran-Contra affair finally has a comprehensive history worthy of the scandal … Malcolm Byrne has told the complex story in brilliant fashion.”

“Iran-Contra” details the historical, political, and institutional background against which the affair played out. Utilizing tens of thousands of pages of previously classified materials, the narrative describes in detail all the administration’s decisions and actions, and discusses the rationales invoked at the time as well as after the fact (explanations that sometimes differed widely).

Looking beyond the U.S. side, the volume explores — through documents and interviews — the views and actions of Iranians, Israelis, Nicaraguans, and others who played parts in the affair. Many of these insights are published here for the first time.

“Iran-Contra” is the first full-length account of the affair to study and assess the various official investigations that were convened — the Tower Commission, the joint congressional hearings, and the independent counsel’s inquiry. The limitations of each helped lead to an inconclusive end to the affair, which has had implications for the unchecked conduct of future presidents and their administrations.

While the scandal had many contributors — including Congress, which failed to avert either element of the affair or to pass meaningful legislation in its wake — the role of the president and his top aides stands out.

Today’s posting includes a revealing series of recently declassified high-level records that explore the president’s thinking and actions during the affair.