A youth sports club and center for children with disabilities in Nablus sustain serious damage after Israeli forces raid a multi-story building in search of wanted Palestinians. 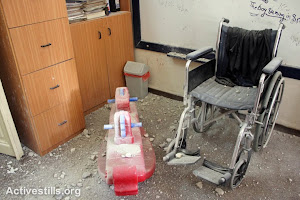 As happens almost every night in Palestinian cities, towns and villages throughout the West Bank, Israeli forces raided Nablus neighborhoods at 1:30 a.m. on Wednesday. Military jeeps spread out to different areas of the city, especially to refugee camps.

The biggest military operation took place in the southern part of the city, where Israeli forces targeted six Palestinians who were sleeping in a local youth sports club. Their main target was Husam Al-Din Abu Riyala, 26, a Fatah activist who had been issued a summons order last month. Soldiers surrounded the building of the sport club, which was located on the third floor of an apartment building, while another group of soldiers occupied the roof of a neighboring house.

Locals reported that the military fired a heavy barrage of live ammunition towards the club while another group of soldiers used explosives to blow open the main door and enter the building.

Five youths managed to escape from windows, while Abu Riyala was shot in the foot with live bullets before being arrested, according to Ma’an News. 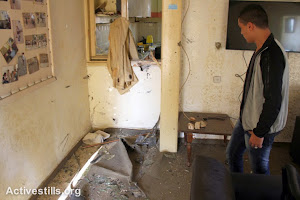 Following the arrest, the military operation ended with a raid on a health center for handicapped children and nursery school located in the same building. At 3:30 a.m., one of the workers from the health center managed to enter the building, discovering that doors had been bombed and other extensive damage.

In a nearby incident, Israeli forces raided Al-Ain Refugee Camp in Nablus in an attempt to arrest 77-year-old Palestinian legislative council member Ahmad Haj Ali of Hamas. Haj Ali was not in his house when the army arrived. Soldiers have stormed his house four times since May 2014, and sources close to his family told Ma’an News that they have threatened his family with killing him. According to Ma’an, Israeli authorities had issued orders to Haj Ali to turn himself in this summer as part of the massive arrest campaign launched against Hamas members, but that he had refused to comply.

Just a few weeks earlier, Zakaria Al-Aqra, 24, of Fatah, was killed by Israeli forces in a raid on his home in the West Bank village of Qabalan. According to the army, Al-Aqra was involved in multiple shooting incidents at Israeli soldiers and said it found arms in the building where he was killed. Six people in his family were wounded in the raid, in which part of the family house was demolished. More