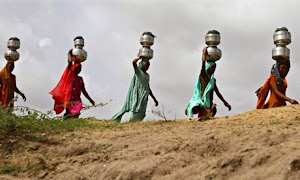 Ned Breslin believes that too many organisations who are providing clean water and sanitation are chasing numbers. He wants to see them be bold enough to operate towards a long-term vision for clean water for everyone. This may seem simple, but he says this is not the way most in the sector operate. He believes these short-term achievements do not always contribute towards solving the systematic issues. I am inspired by Ned and his organisation because they don’t rely on short-term outputs to build legitimacy regardless of outside pressure to do so. They are not afraid to say that real solutions take time.

Ned Breslin on Water for People

The problem is clear. Three decades of support for water projects from NGOs, governments and large and small donors alike have not transformed people’s lives and country’s economic trajectories as such massive investments should.

Few celebrate the report from the World Health Organisation and Unicef (pdf) that shows progress on water supply worldwide – as contradictory evidence paints a much more unfortunate story. The European Union’s scathing audit of water aid investments and the Dutch government’s brave evaluation of their own work (pdf) offer sobering insight into water-sector history and challenges moving forward.

The impact of such failure is also sadly clear. Girls continue to fetch polluted water from muddy puddles and rivers, walking past broken hand-pumps and schools they would be attending if they had the time. To break this cycle, Water For People, the IRC, Water and Sanitation for the Urban Poor, One Drop, and some members of the Millennium Water Alliance are partnering with governments and the local private sector to change the water sector narrative.

We are testing this initiative – called Everyone Forever (EF) – across Africa, Asia and Latin America. The concept is that districts maintain water services for everyone without the need for further philanthropic aid or support.

EF takes a page from polio and smallpox eradication efforts that saturated entire districts, consisting of millions of people and hundreds and thousands of villages. “Everyone” is only achieved when every family, school and clinic in a target district has access to water services, that includes the hardest to reach, the poorest, the disabled, the politically marginalised and the socially ostracised. The poorest in those areas are receiving water services because other residents are covering their tariffs. “Forever” is only achieved when districts show they can sustain these investments over time as populations grow, water resources are threatened, economies change and infrastructure ages.

EF works with governments and insists that their financial support is essential for success. We have seen a 39% increase in government investments towards EF in the past year, with examples like the district of Rulindo in Rwanda now spending over $1m a year on water infrastructure.

Two districts – Chinda, Honduras and Cuchumuela, Bolivia – have reached full coverage verified by the national government. Another five areas are close, including an island in the Ganges in India where half a million pilgrims use the local sanitation system every year (pdf).

One mayor in Bolivia now brags about his district achieving “everyone” status. As a result, other mayors across the country are replicating EF, channeling their investments towards full district coverage. Similar spread is happening in India, Rwanda, Ghana, Uganda and Honduras.

Momentum is now building scaled work that excludes nobody, transcends individual communities and is focused on sustainability. Everyone Forever offers a model that is hard to argue against by politicians and development agencies. The alternative – more projects and hollow slogans of coverage delinked from investments – is simply not good enough anymore. More