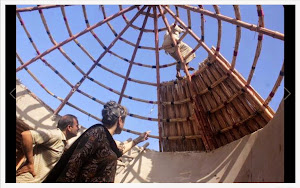 Yasmeen Lari is Pakistan’s first female architect and one of the most successful providers of disaster relief shelters in the world. She has built over 36,000 houses for victims of floods and earthquakes in Pakistan since 2010.

Shunning the structurally weak, mass-produced houses offered by international organisations, Lari uses vernacular techniques and local materials such as lime and bamboo. Her houses have a tiny carbon footprint and are simple enough for people to build themselves. With this, she hopes to demonstrate the role that architecture can play in humanitarian aid.

“I often tell my colleagues, let us not treat disaster-affected households as destitute, needing handouts … but with dignity,” she says.

Lari once built giant concrete and steel buildings for clients like the Pakistani State Oil company. But when disaster struck in 2005, she turned to traditional techniques to design flood and earthquake proof buildings for people in remote regions.

She returns to the Sindh region to see how her homes survived the 2013 floods and helps villagers in Awaran after the 2013 Balochistan earthquake.

Just a week before I left for Pakistan to film this documentary, the chief minister of my home state Rajasthan in India (which, incidentally, borders Sindh, the part of Pakistan that I was about to visit), pledged that within the next two years, there would be not a single mud house left standing in the state.

For many years the central government in India has already had a programme in place, which gives those in rural areas a sum of money to replace their traditional mud houses with brick and cement structures. Traditional is seen as poor and inferior and the fast track to “development” cannot, God forbid, be lined with mud and thatch houses.

While filming in Pakistan, I shared our chief minister’s announcement with an artisan who works with Yasmeen Lari at the Heritage Foundation in a village called Moak Sharif in Sindh.

“Thank God we’re decades behind India in this development business,” he said.

On one of my travels in Orissa in India, to a village called Govindpur that is resisting land acquisition for the mega steel company, POSCO, I met a woman who was rebuilding her kachcha house (made of natural materials, such as mud, bamboo and leave) despite being able to access government funding for a concrete house.

“We depend on this land for everything, we take what we know can be replenished. People in cities have no connection with the land so they don’t think twice about cutting down trees, mining the earth hollow. You think you’re separate from nature but you’re not. If this goes, you go,” she said.

What I am constantly being reminded of, as this country builds the capitalist dream, is that we stand to lose the wealth of traditional knowledge that pivots around this belief – ways to farm, heal, learn and live.

At the Heritage Foundation centre in Moak Sharif, Yasmeen Lari has been working to preserve traditional ways of building. The centre was set up by Yasmeen and her team in 2005 and has evolved to include a women’s centre, a small learning centre for children and a clinic to provide health care for the residents of the village.

Yasmeen believes that her role as an architect should not be restricted to designing houses and buildings. Instead, things should grow in an integrated way.

While I was there, they managed to get the government school, once barely functioning, in working order. Women from the village had organised themselves into a ‘mothers committee’ to oversee the school’s daily operations. And after I returned to India, every once in a while, Yasmeen would call and explain, with great delight, something new they were experimenting with – organic farming, bio fertilizers and natural soaps.

Through the making of this film I realised that building the “earth-way” means fluidity, not concreteness. It means working with the community, integrating it with structures of support and togetherness. Building homes, for Yasmeen, is about situating them. She guides her team to create this kind of space. Traditional, yes, but by no means can this approach be deemed irrelevant. More