He’s traveled half a million miles over the years – enough to go around the world 12 times, or to the moon and halfway back – so it’s little wonder that writer, photographer, conservationist and educator Martin Keeley continues to find inspiration for his work. 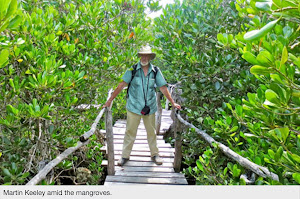 Keeley’s latest trips are with the Marvelous Mangrove education curriculum, a program that teaches schoolchildren about the importance of mangroves and the eco-systems which they support worldwide, as well as training teachers to teach both students and other teachers.

The program was developed by Cayman Brac-based Keeley in 1999 and initially was incorporated into Cayman’s primary school curriculum. It is part of the Mangrove Action Project, a conservation group comprised of more than 300 scientists and academics spanning more than 60 nations.

The Marvelous Mangrove program is now in 11 countries, with the expansion this year to South Sulawesi, Indonesia, and Queensland, Australia.

“For me, the mangrove trips continue to stimulate the creative process,” said the writer.

“They often inspire my poetry, and I reckon that in another six months or so I’ll have enough to publish another anthology. My photography also continues to benefit from my travels and exposure to other cultures and their environments.”

In addition, he says, he gets an in-depth perspective on the countries and the cultures where he works.

“I experience and observe firsthand their societies and the common problems they face – the huge and ever growing disparity between the obscenely wealthy and the desperately poor who are barely making it,” Keeley added.

“The contrasts I observed this summer between nations like Indonesia and Australia stimulate not only sympathy and anger between the haves and have-nots, but empathy with those whose daily struggle is that of survival, while others have little or no idea how lucky they are take for granted their secure and protective social environment.”

At the Indonesian trip, 30 teachers and educators spent three days in an intense workshop that, in the words of Keeley, “introduced them to the wonderful world of mangroves through hands-on science.”

A particular highlight was the surprise introduction of 15 school kids who came in and assisted for the afternoon, Keeley said.

“The setting is perfect, with elevated cabins connected by elevated walkways and the “hall” for the workshop itself in a Roman-style amphitheater that is open to the elements – roofed, but with shutters, not glass windows,” he said.

“The accommodation, theater and restaurant operate independent of the grid on solar power with water from local wells and storage systems which is treated through solar osmosis, although it sometimes has to be topped up by water trucks during the dry season. The food is all grown locally, and mostly seafood that is caught locally on a daily basis.”

The Australian leg of the trip, he said, was slightly different.

“Australia saw the launch of ‘Mangrovia,’ a huge inflatable red mangrove that students go inside to explore and hear storytelling,” Keeley said.

“In addition, Mangrovia’s creator, international festival artist Evelyn Roth, also designed and made 28 costumes of mangrove critters that are used in conjunction with the inflatable.

“Many Cayman students [and adults] have had similar experiences with my huge inflatable shark and the 30 mangrove critter costumes which go with it during the past 15 years! It’s an exciting way to learn.”

The issue of mangrove conservation has become more and more important in recent years, Keeley says, largely because of their environmental qualities.

“It has been known for many years, and the 2004 Asian Tsunami proved it beyond doubt, that mangroves are the first line of defense against major tropical storms, be they hurricanes or typhoons,” Mr. Keeley continued.

“Recent studies during the past six or seven years have also shown that, given the opportunity, mangroves will keep pace with sea level rise thereby extending that level of protection. In addition, recent research has shown that mangroves capture CO2 from the atmosphere and store it in leaves, roots, trunks and soil.

“No maximum storage capacity has been determined as the trees continuously store carbon in the soil for centuries or millennia. Obviously ripping out mangroves releases this stored CO2 and thereby adds to the acceleration of global warming.

“National governments from Vietnam and China to Belize and Guatemala have come to understand what local communities and scientists have been telling them for many years. Mangroves are the major source of more than 75 percent of reef species of fish and invertebrates – they are the spawning and nursery grounds for these species. Thousands of communities round the world rely on these aquatic species for their livelihoods and to feed their families.”

Next up for stamps on the increasingly-packed passport pages will be trips to Bangladesh and Kenya, scheduled for summer 2015. Keeley has already visited both briefly to get the ball rolling and he told Weekender that – funding permitting – translations of the materials and teacher training workshops will be introduced.

There seems no sign of slowing down there, either, for the Brac-based whirlwind.

“World-wide at least a dozen other countries are interested in the Marvellous Mangroves curriculum,” he concluded.

“As usual, it’s just a matter of time and, of course, money, to make it happen.” More