The state of Sao Paulo is facing its worst drought in eight decades, threatening the water supplies for 20 million people — but you wouldn’t know that by asking Brazil’s elected officials. 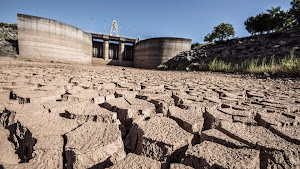 Sao Paulo Governor Geraldo Alckmin, who is seeking re-election in October, has been minimizing the crisis for the region, which includes South America’s largest city. The reaction is a far cry from the response in drought-stricken California, where Governor Jerry Brown has declared a state of emergency and residents are being fined for watering their lawns.

Sao Paulo state is already rationing water for more than 2 million people in 18 cities. The capital city’s main reservoir is now at only 12 percent of capacity, according to the water utility Cia. de Saneamento Basico do Estado de Sao Paulo, known as Sabesp. While the utility received a warning at the end of July that it risks running out of drinking water in 100 days, officials vow the situation is under control.

“Sao Paulo is denying this crisis because we are in the middle of the political campaign,” said Joao Simanke, a hydrogeologist consultant who worked for Sabesp for more than two decades. “The crisis is already in place and it is getting worse, but until now it has been possible to mask it.”

Blaming unusual weather in a city traditionally known as “drizzly Sao Paulo,” Alckmin denied last week he was slow to respond to the drop in the city’s main reservoir, which began in May 2013, because of the political cost of rationing.

“The situation in Sao Paulo is serious, but it is under control,” Mauro Arce, water resources secretary for the state, said in a telephone interview.

While Brazil’s largest city isn’t rationing water, thousands of residents are already complaining of reduced flow from their taps in the past two months.

In February, Sabesp began offering 30 percent discounts to customers who cut consumption by at least 20 percent of their 12-month average. The utility is spending money on special equipment to pull water known as “dead volume” from the very bottom of the Cantareira reservoir and to get supplies from other reservoirs.

In California, an estimated 82 percent of the state is experiencing extreme drought. Most of its major reservoirs are at less than half of capacity, state records show, as residents face restrictions on car washes and restaurants only serve water to customers who request it.

Relief may be slow to come before more Sao Paulo residents have to contend with water limits. According to weather forecaster Climatempo, the spring season that starts in September will bring rains at or below historical averages — not enough to refill basins. The drenching El Nino rains that caused floods in southern Brazil won’t travel far enough north to help refill reservoirs in Sao Paulo.

“Sao Paulo’s situation is not devastating such as the California’s situation, because the American state has experienced droughts many times,” he said. “We have never seen anything similar in Sao Paulo, so we are in an uncomfortable situation.”

Sao Paulo should be already adopting more measures in an attempt to reduce water usage, such as a progressive water rate in which consumers pay more for exceeding a certain level of water consumption, said Braga, who was on the board of Brazil’s national water agency from 2001 to 2009.

Sao Paulo’s water resources secretary said there’s no need to adopt more measures to reduce demand and pressure on the city’s water reservoirs. The government isn’t minimizing the crisis and it’s reaching out to increase awareness of the issue, Arce said. Irrigation in the upper reaches of rivers is already being limited, he said.

“The situation is serious and we are dealing with it with the seriousness it deserves,” Arce said. Sabesp says its voluntary demand reduction programs are working and some, including Gesner Oliveira, a consultant who served as Sabesp’s president from 2007 to 2010, agree.

“The set of measures adopted were correct to manage the situation of water scarcity,” said Oliveira.

“The water saving campaign is not enough to avoid a bigger problem and people don’t exactly know what is going on,” said Samuel Barreto, a coordinator with the Nature Conservancy. “The government must better inform the population.”

Marco Antonio Barros, superintendent of water production of Sabesp, downplayed the possibility the company would fine customers for excessive water use, saying such penalties took a long time to be established in California. Limiting secondary uses of water, for washing cars and other non-drinking consumption, is possible, he said.

According to a July report by Citigroup Inc., if the water flow remains below average for the remainder of the year, the Cantareira reservoir “will dry up by December in spite of the use of dead-storage volume.”

Sabesp expects to be able to supply water until the rainy season ends in March and says the chance of rationing in the capital by the end of the year is zero. Recovery of its reservoirs in the first months of the next season is unlikely “even if it rains a lot,” Sabesp Chief Financial Officer Rui Affonso said on the conference call. “The constancy of the rains is what matters.” More

To contact the reporter on this story: Vanessa Dezem in Sao Paulo at vdezem@bloomberg.net

To contact the editors responsible for this story: Reed Landberg at landberg@bloomberg.net Tina Davis, Randall Hackley