Iran on Sunday unveiled two new missiles and two new drones it said have been added to its arsenal, in a ceremony attended by President Hassan Rouhani. 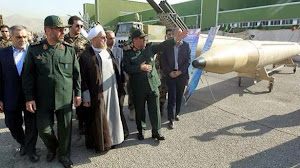 The Ghadir (Mighty), with a range of 300 kilometres (185 miles), is a ground-to-sea and sea-to-sea missile, the official IRNA news agency said.

It is in the same family as the Ghader or Qader cruise missile, which has a range of 200 kilometres.

The other missile unveiled on Sunday, the Nasr-e Basir (Clear Victory), is equipped with a seeker homing head. Its range was not given.

The new Karar-4 (Striker) drone can track and monitor enemy aircraft, the agency said, while the Mohajer-4 (Migrant) drone is designed to perform photographic and mapping missions.

The United States, whose Fifth Fleet is based in Sunni-ruled Bahrain across the Gulf from the mainly Shiite Islamic republic, has repeatedly expressed concern about these two programmes.

Rouhani on Sunday sought to allay such fears.

“Iran has no intention to interfere in, dominate or attack other countries or plunder their resources,” he said in a speech broadcast on state television, adding that the country’s military doctrine was defensive.

“But at the same time we will stand up to any aggression,” he added.

In May, Iran said it had succeeded in copying an American RQ-170 Sentinel drone that it forced down and recovered nearly intact in December 2011.

Tehran is currently engaged in negotiations with the five permanent members of the UN Security Council plus Germany — known as P5+1 — on securing an agreement with world powers on its controversial nuclear programme.

Israel and Western powers suspect Iran’s civilian nuclear project to be a cover to develop an atomic weapon, an allegation Tehran denies, insisting its uranium enrichment drive is entirely peaceful.