Jason Westcott was afraid. One night last fall, he discovered via Facebook that a friend of a friend was planning with some co-conspirators to break in to his home. They were intent on stealing Wescott’s handgun and a couple of TV sets. According to the Facebook message, the suspect was planning on “burning” Westcott, who promptly called the Tampa Bay police and reported the plot. 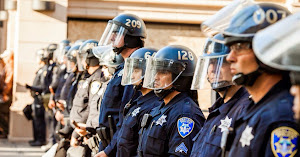 According to the Tampa Bay Times, the investigating officers responding to Westcott’s call had a simple message for him: “If anyone breaks into this house, grab your gun and shoot to kill.”

Around 7:30 pm on May 27th, the intruders arrived. Westcott followed the officers’ advice, grabbed his gun to defend his home, and died pointing it at the intruders. They used a semiautomatic shotgun and handgun to shoot down the 29-year-old motorcycle mechanic. He was hit three times, once in the arm and twice in his side, and pronounced dead upon arrival at the hospital.

The intruders, however, weren’t small-time crooks looking to make a small score. Rather they were members of the Tampa Bay Police Department’s SWAT team, which was executing a search warrant on suspicion that Westcott and his partner were marijuana dealers. They had been tipped off by a confidential informant, whom they drove to Westcott’s home four times between February and May to purchase small amounts of marijuana, at $20-$60 a pop. The informer notified police that he saw two handguns in the home, which was why the Tampa Bay police deployed a SWAT team to execute the search warrant.

In the end, the same police department that told Westcott to protect his home with defensive force killed him when he did. After searching his small rental, the cops indeed found weed, two dollars’ worth, and one legal handgun — the one he was clutching when the bullets ripped into him.

Welcome to a new era of American policing, where cops increasingly see themselves as soldiers occupying enemy territory, often with the help of Uncle Sam’s armory, and where even nonviolent crimes are met with overwhelming force and brutality.

The War on Your Doorstep

The cancer of militarized policing has long been metastasizing in the body politic. It has been growing ever stronger since the first Special Weapons and Tactics (SWAT) teams were born in the 1960s in response to that decade’s turbulent mix of riots, disturbances, and senseless violence like Charles Whitman’s infamous clock-tower rampage in Austin, Texas.

Every year now, there are approximately 50,000 SWAT raids in the United States

While SWAT isn’t the only indicator that the militarization of American policing is increasing, it is the most recognizable. The proliferation of SWAT teams across the country and their paramilitary tactics have spread a violent form of policing designed for the extraordinary but in these years made ordinary. When the concept of SWAT arose out of the Philadelphia and Los Angeles Police Departments, it was quickly picked up by big city police officials nationwide. Initially, however, it was an elite force reserved for uniquely dangerous incidents, such as active shooters, hostage situations, or large-scale disturbances.

As the number of SWAT teams has grown nationwide, so have the raids. Every year now, there are approximately 50,000 SWAT raids in the United States, according to Professor Pete Kraska of Eastern Kentucky University’s School of Justice Studies. In other words, roughly 137 times a day a SWAT team assaults a home and plunges its inhabitants and the surrounding community into terror.

In a recently released report, “War Comes Home,” the American Civil Liberties Union (my employer) discovered that nearly 80% of all SWAT raids it reviewed between 2011 and 2012 were deployed to execute a search warrant.

Pause here a moment and consider that these violent home invasions are routinely used against people who are only suspected of a crime. Up-armored paramilitary teams now regularly bash down doors in search of evidence of a possible crime. In other words, police departments increasingly choose a tactic that often results in injury and property damage as its first option, not the one of last resort. In more than 60% of the raids the ACLU investigated, SWAT members rammed down doors in search of possible drugs, not to save a hostage, respond to a barricade situation, or neutralize an active shooter.

On the other side of that broken-down door, more often than not, are blacks and Latinos. When the ACLU could identify the race of the person or people whose home was being broken into, 68% of the SWAT raids against minorities were for the purpose of executing a warrant in search of drugs. When it came to whites, that figure dropped to 38%, despite the well-known fact that blacks, whites, and Latinos all use drugs at roughly the same rates. SWAT teams, it seems, have a disturbing record of disproportionately applying their specialized skill set within communities of color.

Think of this as racial profiling on steroids in which the humiliation of stop and frisk is raised to a terrifying new level.

Don’t think, however, that the military mentality and equipment associated with SWAT operations are confined to those elite units. Increasingly, they’re permeating all forms of policing.

As Karl Bickel, a senior policy analyst with the Justice Department’s Community Policing Services office, observes, police across America are being trained in a way that emphasizes force and aggression. He notes that recruit training favors a stress-based regimen that’s modeled on military boot camp rather than on the more relaxed academic setting a minority of police departments still employ. The result, he suggests, is young officers who believe policing is about kicking ass rather than working with the community to make neighborhoods safer. Or as comedian Bill Maher reminded officers recently: “The words on your car, ‘protect and serve,’ refer to us, not you.”

This authoritarian streak runs counter to the core philosophy that supposedly dominates twenty-first-century American thinking: community policing. Its emphasis is on a mission of “keeping the peace” by creating and maintaining partnerships of trust with and in the communities served. Under the community model, which happens to be the official policing philosophy of the U.S. government, officers are protectors but also problem solvers who are supposed to care, first and foremost, about how their communities see them. They don’t command respect, the theory goes: they earn it. Fear isn’t supposed to be their currency. Trust is.

Nevertheless, police recruiting videos, as in those from California’s Newport Beach Police Department and New Mexico’s Hobbs Police Department, actively play up not the community angle but militarization as a way of attracting young men with the promise of Army-style adventure and high-tech toys. Policing, according to recruiting videos like these, isn’t about calmly solving problems; it’s about you and your boys breaking down doors in the middle of the night.

SWAT’s influence reaches well beyond that. Take the increasing adoption of battle-dress uniforms (BDUs) for patrol officers. These militaristic, often black, jumpsuits, Bickel fears, make them less approachable and possibly also more aggressive in their interactions with the citizens they’re supposed to protect.

A small project at Johns Hopkins University seemed to bear this out. People were shown pictures of police officers in their traditional uniforms and in BDUs. Respondents, the survey indicated, would much rather have a police officer show up in traditional dress blues. Summarizing its findings, Bickel writes, “The more militaristic look of the BDUs, much like what is seen in news stories of our military in war zones, gives rise to the notion of our police being an occupying force in some inner city neighborhoods, instead of trusted community protectors.”

Where Do They Get Those Wonderful Toys?

“I wonder if I can get in trouble for doing this,” the young man says to his buddy in the passenger seat as they film the Saginaw County Sheriff Office’s new toy: a Mine Resistant Ambush Protected (MRAP) vehicle. As they film the MRAP from behind, their amateur video has a Red Dawn-esque feel, as if an occupying military were now patrolling this Michigan county’s streets. “This is getting ready for f**king crazy times, dude,” one young man comments. “Why,” his friend replies, “has our city gotten that f**king bad?”

In fact, nothing happening in Saginaw County warranted the deployment of an armored vehicle capable of withstanding bullets and the sort of improvised explosive devices that insurgent forces have regularly planted along roads in America’s recent war zones. Sheriff William Federspiel, however, fears the worst. “As sheriff of the county, I have to put ourselves in the best position to protect our citizens and protect our property,” he tolda reporter. “I have to prepare for something disastrous.”

Lucky for Federspiel, his exercise in paranoid disaster preparedness didn’t cost his office a penny. That $425,000 MRAP came as a gift, courtesy of Uncle Sam, from one of our far-flung counterinsurgency wars. The nasty little secret of policing’s militarization is that taxpayers are subsidizing it through programs overseen by the Pentagon, the Department of Homeland Security, and the Justice Department.

Take the 1033 program. The Defense Logistics Agency (DLA) may be an obscure agency within the Department of Defense, but through the 1033 program, which it oversees, it’s one of the core enablers of American policing’s excessive militarization. Beginning in 1990, Congressauthorized the Pentagon to transfer its surplus property free of charge to federal, state, and local police departments to wage the war on drugs. In 1997, Congress expanded the purpose of the program to include counterterrorism in section 1033 of the defense authorization bill. In one single page of a 450-page law, Congress helped sow the seeds of today’s warrior cops.

The amount of military hardware transferred through the program has grown astronomically over the years. In 1990, the Pentagon gave $1 million worth of equipment to U.S. law enforcement. That number had jumped to nearly $450 million in 2013. Overall, the program has shipped off more than $4.3 billion worth of materiel to state and local cops, according to the DLA.

In its recent report, the ACLU found a disturbing range of military gear being transferred to civilian police departments nationwide. Police in North Little Rock, Arkansas, for instance, received 34 automatic and semi-automatic rifles, two robots that can be armed, military helmets, and a Mamba tactical vehicle. Police in Gwinnet County, Georgia, received 57 semi-automatic rifles, mostly M-16s and M-14s. The Utah Highway Patrol, according to a Salt Lake City Tribune investigation, got an MRAP from the 1033 program, and Utah police received 1,230 rifles and four grenade launchers. After South Carolina’s Columbia Police Department received its very own MRAP worth $658,000, its SWAT Commander Captain E.M. Marsh noted that 500 similar vehicles had been distributed to law enforcement organizations across the country. More