Low rainfall linked to the El Nino weather phenomenon has led to drought in parts of Central America, causing widespread damage to crops, shortages and rising prices of food, and worsening hunger among the region’s poor. 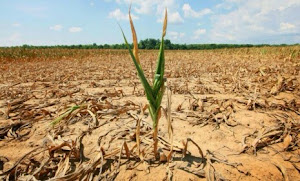 An unusually hot season and extended dry spells have brought drought to areas in eastern and western Guatemala and El Salvador, southern Honduras and northern and central Nicaragua, destroying swathes of bean and maize crops, the region’s staple foods, and putting pressure on subsistence farmers and food prices.

“Extremely poor households across large areas of Guatemala, Nicaragua, Honduras, and El Salvador will experience a rapid deterioration in their food security in early 2015.

“Atypically high levels of humanitarian assistance, possibly the highest since Hurricane Mitch in 1998, will likely be required in order to avoid a food crisis,” said a recent report by the Famine Early Warning Systems Network (FEWS NET), run by the US Agency for International Development (USAID).

Thousands of families in the region have become too poor to buy enough food for survival because poor harvests are pushing up prices of staple foods while coffee producers are hiring fewer seasonal coffee pickers and paying lower wages because of a coffee leaf rust or roya epidemic across Central America.

In Nicaragua and Honduras, red bean prices rose by up to 129 percent between January and June 2014, according to FEWS NET.

Other livelihoods in Central America, including fishing and livestock breeding, have also been hard hit by the recent drought and the El Nino weather phenomenon, FEWS NET said.

El Nino, which can last more than a year, significantly raises surface temperatures in the central and eastern areas of the tropical Pacific Ocean, a phenomenon linked to major climate fluctuations around the world.

In response to the drought, the Guatemalan government has said it will begin distributing 4,000 tonnes of food aid to more than 170,000 families affected by the drought from early October, using government and United Nations World Food Programme (WFP) food reserves.

One of the poorest countries in Central America, Guatemala already struggles to feed its population, particularly those impoverished indigenous communities living in rural areas.

Around half Guatemala’s population of 15 million lives in poverty and the country has the world’s fourth highest rate of chronic malnutrition, which affects almost half the children under five, according to the WFP.

In neighboring Honduras, the government is distributing food, including rice, beans and flour, and vitamin supplements to 76,000 families, many subsistence farmers, affected by the drought.