The carnage in the Gaza Strip has been horrendous: more than 1,900 dead, mainly civilians; its sole power plant destroyed (and so electricity and water denied and a sewage disaster looming); 30,000 to 40,000 homes and buildings damaged or destroyed; hundreds of thousands of residents put to flight with nowhere to go; and numerous U.N. schools or facilities housing some of those refugees hit by Israeli firepower. 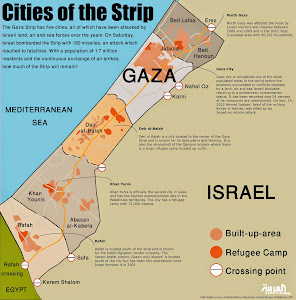 And then there was the evident targeting by the Israelis of the Gazan economy itself: 175 major factories taken out, according to the New York Times, in a place that already had an estimated unemployment rate of 47%.

The last weeks represent the latest episode in a grim, unbalanced tale of the destructive urges of both the Israeli government and Hamas, in a situation in which the most fundamental thing has been the desire to punish civilians. Worse yet, indiscriminate assaults on civilian populations create the basis for more of the same — fiercer support in Israel for governments committed to ever worse actions and ever more recruits for Hamas or successor organizations potentially far worse and more fundamentalist), and of course more children traumatized and primed for future acts of terror and revenge.

Think of it as the Middle Eastern equivalent of a self-fulfilling prophecy, which means it hardly even qualifies as a prediction to say that Israel’s violent and punishing acts against the civilian population of Gaza will settle nothing whatsoever. In fact, for the Israelis, as Sandy Tolan suggests today, the Gazan War of 2014 may prove a defeat, both in the arena of global opinion (U.S. polls show that young Americans are ever more sympathetic to the Palestinians and disapproving of Israeli actions) and in relation to Hamas itself. History indicates that air strikes and other attacks meant to break the “will” of a populace, and so of a movement’s hold on it, generally only create more support.

These have been the days of the whirlwind in Gaza and in Israel, but don’t stop there. If you want a hair-raising experience, put these events in a larger regional context.

Following 9/11, the Bush administration and its neocon supporters dubbed the area that stretched from North Africa to Central Asia “the Greater Middle East” and referred to that vast expanse as “the arc of instability.” At the time, despite their largely Muslim populations, the nations of that sprawling region had relatively little in common; nor, on the whole, was it particularly unstable, even if the roiling Israeli-Palestinian situation already sat at its heart.

Ruled largely by strongmen and autocrats, those nations remained in a grim post-Cold War state of stasis. Three American interventions — in Afghanistan (2001), Iraq (2003), and Libya (2011) — blew holes through the region, sparking bitter inter-ethnic and religious conflict, as well as an Arab Spring (largely suppressed by now), while transforming most of the Greater Middle East into a genuine arc of instability. Today, what's happening there qualifies as the perfect maelstrom, as yet more states and groups, insurgent, extremist, or otherwise, are drawn into its maw of destruction.

To start on the eastern reaches of the Greater Middle East, Pakistan is now a destabilized democracy with a fierce set of fundamentalist insurgencies operating within and from its territory; Afghanistan is an almost 13-year nation-building disaster where the Taliban is resurgent and, in the latest “insider attack” at its top military academy, an Afghan soldier considered an American “ally” managed to kill a U.S. major general sent to the country to help “stand up” its security forces. Iraq is a tripartite disaster area in which another American-trained and -equipped army stood down rather than up and in which an extreme al-Qaeda offshoot, the Islamic State (IS) is at the moment ascendant. It has routed Iraqi and Syrian forces, and most recently, the supposedly fierce Kurdish pesh merga militia in northern Iraq, while endangering the Kurdish capital and possibly seizing the country’s largest dam. Turkish and Syrian Kurdish insurgents are being drawn into the fight in Iraq, as once again is the U.S.

Syria itself is no longer a country at all, but a warring set of extremist outfits facing what’s left of the patrimony (and military) of the al-Assad family. In Lebanon last week, regular army units found themselves battling IS extremists and their captured American tanks for the control of a border town. In Egypt, the military is back in power atop a disintegrating economy. In Libya, the chaos following the U.S./NATO intervention that led to the fall of autocrat Muammar Gaddafi never ended. Recently, factional militias fighting in Tripoli, the capital, managed to destroy its international airport, while diplomatic missions, including the U.S. one, were withdrawn in haste, and now the Egyptians are threatening an intervention of their own. Meanwhile, reverberations from the chaos in Libya have been spreading across North Africa and heading south. Only Iran (eternally under threat from the U.S. and Israel), Saudi Arabia (which helped bankroll the rise of the IS), and the Gulf States seem to have remained — thus far — relatively aloof from the chaos.

In sum, the vast region the Bush people so blithely called the arc of instability seems to be heading for utter chaos or a mega-conflict, while the predicted “cakewalk” of American forces into Iraq managed, in barely a moment in historical time, to essentially obliterate the regional borders set up by the European colonial powers after World War I. In other words, a world is being unified in turmoil and extremism, as thousands die and millions are uprooted from their homes, and all of this now surrounds the volatile, still destabilizing center that is the Palestinian/Israeli nightmare. There, as Sandy Tolan, a TomDispatch regular and the author of The Lemon Tree: An Arab, a Jew, and the Heart of the Middle East, points out, both Tel Aviv and Washington have, in recent years, ignored every chance to take a less violent path and so encouraged the arrival of the maelstrom. Tom – Follow TomDispatch on Twitter @TomDispatch.

Blown Chances in Gaza
Israel and the U.S. Miss Many Chances to Avoid War
By Sandy Tolan

Alongside the toll of death and broken lives, perhaps the saddest reality of the latest Gaza war, like the Gaza wars before it, is how easy it would have been to avoid. For the last eight years, Israel and the U.S. had repeated opportunities to opt for a diplomatic solution in Gaza. Each time, they have chosen war, with devastating consequences for the families of Gaza.

Let’s begin in June 2006, when the University of Maryland’s Jerome Segal, founder of the Jewish Peace Lobby, carried a high-level private message from Gaza to Washington. Segal had just returned from a meeting with Ismail Haniyeh, whose Hamas faction had recently won free and fair elections and taken power in Gaza. Hamas was seeking a unity government with the rival Fatah faction overseen by Mahmoud Abbas.

The previous year, Israel had withdrawn its soldiers and 8,000 settlers from Gaza, though its armed forces maintained a lockdown of the territory by air, land, and sea, controlling the flow of goods and people. Gazans believed they were trapped in the world’s largest open-air prison. For generations they had lived in overcrowded refugee camps, after their villages were depopulated by Israel and new Israeli cities built on their ruins in the years that followed Israel’s birth in 1948. By voting for Hamas in 2006, Palestinians signaled their weariness with Fatah’s corruption and its failure to deliver an independent state, or even a long-promised safe passage corridor between the West Bank and Gaza. In the wake of its surprise election victory, Hamas was in turn showing signs of edging toward the political center, despite its militant history.

Nevertheless, Israel and “the Quartet” — the U.S., the European Union, Russia, and the U.N. — refused to recognize the outcome of the democratic elections, labeling Hamas a “terrorist organization,” which sought Israel’s destruction. The administration of George W. Bush strongly pressured Abbas not to join a unity government. The Quartet suspended economic aid and Israel severely curtailed the flow of goods in and out of Gaza.

“It’s like meeting with a dietician,” remarked Dov Weisglass, a top aide to Israeli Prime Minister Ariel Sharon. “We have to make [Gazans] much thinner, but not enough to die.” Only years later did researchers prove that Weisglass was speaking literally: Israeli officials had restricted food imports to levels below those necessary to maintain a minimum caloric intake. Child welfare groups began to report a sharp rise in poverty and chronic child malnutrition, anemia, typhoid fever, and potentially fatal infant diarrhea. Human rights organizations denounced the measures as collective punishment. Avi Shlaim, a veteran of the Israeli army, author of numerous books on Middle East history, and professor of international relations at the University of Oxford, wrote:

These punitive measures were to remain in place until Hamas renounced violence (including stopping its cross-border rocket attacks), recognized Israel, and accepted all previous agreements based on the Oslo peace accords.

Which brings us back to that Washington-bound letter from Gaza. In the wake of the elections, Hamas was no longer the militant opposition to a ruling Fatah party, but a legally elected government operating under siege. Hamas leader Ismail Haniyeh, suddenly responsible for governing and facing a mounting economic, humanitarian, and political catastrophe, sought to defuse the situation. In his June 2006 hand-written note to President Bush that Jerome Segal delivered to the State Department and the National Security Council, he requested a direct dialogue with the administration.

Despite Hamas’s charter calling for the elimination of Israel, Haniyeh’s conciliatory note to the American president conveyed a different message. “We are so concerned about stability and security in the area that we don't mind having a Palestinian state in the 1967 borders and offering a truce for many years,” Haniyeh wrote to Bush. This essentially added up to an offer ofde facto recognition of Israel with a cessation of hostilities — two of the key U.S. and Israeli demands of Hamas.

“The continuation of this situation,” Haniyeh wrote to Bush, “will encourage violence and chaos in the whole region.”

A few lonely voices in the U.S. and Israel urged that the moment be seized and Hamas coaxed toward moderation. After all, Israel itself had been birthed in part by the Irgun and Stern Gang (or Lehi), groups considered terrorist by the British and the U.N. In the years before Israel’s birth, they had been responsible for a horrific massacre in the Palestinian village of Deir Yassin and the Irgun bombing of the King David Hotel, killing 91 people. Leaders of the two organizations, Menachem Begin and Yitzhak Shamir, later became prime ministers of Israel. Similarly, Yasser Arafat, whose Palestine Liberation Organization was considered a terrorist group by Israel and the West, recognized Israel’s right to exist in a pivotal 1988 speech, paving the way for the Oslo peace process. More