There’s a reason that power companies are attacking rooftop solar across the nation: They see those silicon panels as nothing short of an existential threat.

As the cost of solar continues to fall, and more people opt for the distributed power offered by solar, there will be less demand for big power plants and the utilities that operate them. And one major investment giant has now released three separate reports arguing that Tesla Motors is going to help kill power companies off altogether.

Earlier this year, Morgan Stanley stirred up controversy when it released a report that suggested that the increasing viability of consumer solar, paired with better battery technology—that allows people to generate, and store, their own electricity—could send the decades-old utility industry into a death spiral. Then, the firm released another one, further emphasizing the points made in the first. Now, it’s tripling down on the idea with yet another report that spells out how Tesla and home solar will “disrupt” utilities.

“There may be a ‘tipping point’ that causes customers to seek an off-grid approach,” the March report argued. ”The more customers move to solar, the [more the] remaining utility customers’ bills will rise, creating even further ‘headroom’ for Tesla’s off-grid approach.”

Yes, Tesla Motors, everyone’s favorite electric car company. And that’s where the controversy comes in. Morgan Stanley breathlessly pegged Tesla as “the most important auto company in the world” in part because its electric car business was pushing it to develop better energy storage technology, and then mass manufacture said batteries. That’s exactly what Tesla CEO Elon Musk and company will be doing at its forthcoming Gigafactory, which it is building in the Southwest with Panasonic.

With the new manufacturing facility, Morgan Stanley reasons, Tesla stands to double its business (adding another $2 billion in revenue) by selling the lithium ion batteries it typically ships under the hood of a Model S to homeowners with solar panels, too. If consumers can store energy the panels generate during the day for use at night, it would ostensibly render the need for utilities to pipe in faraway power—and their electric bills—obsolete.

Energy storage, when combined with solar power, could disrupt utilities in the US and Europe to the extent customers move to an off-grid approach

Musk is also the chairman of Solar City, a company that leases rooftop solar setups to homeowners, and one that would benefit from the battery tech. Now, the shadiness here is that Morgan Stanley released the report trumpeting Tesla’s crossover energy storage potential—causing Tesla’s stock to rise—right before it underwrote a fundraising round for… Tesla. 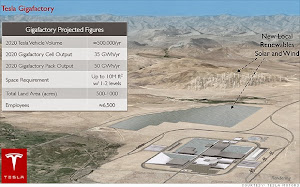 So the whole thing is very incestuous, and it does render some of the projections a little suspect, but the bottom line here is that private solar and battery companies are viable enough that they’ve attracted the backing of one of the world’s biggest financial services companies—over the multi-trillion dollar utility industry.

“Energy storage, when combined with solar power, could disrupt utilities in the US and Europe to the extent customers move to an off-grid approach,” Morgan Stanley writes in its third report this year emphasizing the prospect. ”We believe Tesla’s energy storage product will be economically viable in parts of the US and Europe, and at a fraction of the cost of current storage alternatives.”

In other words, Morgan Stanley has Tesla’s back, big time. It’s betting that Musk is going to make the best solar energy batteries money can buy.

Ironically enough, however, even staunch clean energy advocates are wary about Morgan Stanley’s finding that utilities are going the way of the buffalo. “Barring extraordinary circumstances, the economic case for grid defection is still very weak for US consumers,” Stephen Lacey, the senior editor of Greentech Media, wrote of the Morgan Stanley report. ”The electricity system offers valuable backup in case a customer over- or under-invests in an on-site system.”

It’s more likely, then, that people will still buy home solar—by the tens of millions, Greentech suggests—but not unplug from the grid entirely. Utilities will be diminished, but not broken. This process is underway in Europe already, where countries like Germany have powerful incentives for consumers to switch to solar.

Last year, the Economist called the sharp decline of European utilities “startling,” noting that together, they lost half their value—$600 billion—in just five years. Here in the states, utilities and conservative politicians are fighting solar tax credits to prevent the same thing from happening. For the most part, the utilities are losing.

All of this is, ideally, what needs to happen. Climate change is accelerating, and we need to transition away from those massive, fossil fuel-slurping power plants. Distributed solar is an increasingly powerful force behind that weaning process.

And even if some of Morgan Stanley’s calculations are shaky, the trends that Tesla is helping to amplify are anything but—clean, personalized (or community-wide) power will play a major role in shaping our energy future.

The fact that a greed-driven titan of finance like Morgan Stanley recognizes as much, and is willing to triple down on its bets on battery storage and distributed power, is a promising sign that the energy revolution is underway. More