We now have confirmation from the Israeli daily Haaretz of what we should have suspected: that the idea for the so-called Egyptian “ceasefire proposal” was actually hatched in Washington, the messenger boy was arch-war criminal Tony Blair, and the terms were drafted by Israel. 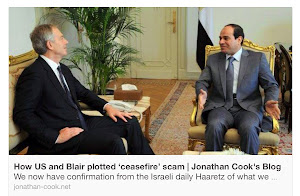 The intention was either to corner Hamas into surrendering – and thereby keep the savage blockade of Gaza in place – or force Hamas to reject the proposal and confirm the Israeli narrative that it is a terrorist organisation with which Israel cannot make peace.

According to Haaretz, Blair secretly initiated his “ceasefire” activity after “coordinating” with US Secretary of State John Kerry. On Saturday he headed off to Cairo to meet with the US-backed Egyptian dictator Abdel Fattah al-Sisi to persuade him to put his name to the proposal.

Immediately afterwards, he travelled to Israel to meet Benjamin Netanyahu on Saturday afternoon. Sisi and Netanyahu were then supposed to thrash out the details. When they failed to do so, Blair intervened again on behalf of the Americans and the pair spoke by phone on Saturday evening.

Here’s the key paragraph from Haaretz:

Senior Israeli officials and Western diplomats said the reason the Egyptian cease-fire initiative was so short-lived is that it was prepared hastily and was not coordinated with all the relevant parties, particularly Hamas.

Wonderful that throw-away last line. In all this activity, it never occurred to the US, Blair, Sisi or Netanyahu – and no doubt Mahmoud Abbas, who is strangely absent from this account – that it might be necessary to sound out Hamas on the terms of a ceasefire it would need to abide by.

Now it seems Kerry is using US muscle to get Egypt, Qatar and Turkey to strong-arm Hamas into surrendering.

It’s depressingly predictable that the corporate media have swallowed the line of Israel accepting the “ceasefire proposal” and Hamas rejecting it. What Hamas did was reject a US-Israeli diktat to sign away the rights of the people of Gaza to end a siege that cuts them off from the rest of the world.

But there is a long pedigree to such deceptions. It is reminiscent of a hasbara favourite: that the Jews accepted the UN partition plan of 1947 while the Palestinians rejected it. The reality – then, as now – is that the the colonial powers sought to strip the Palestinians of their rights and their homeland without even consulting them.