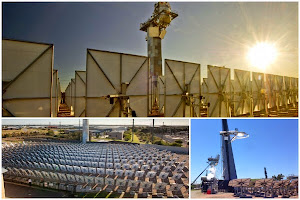 CSIRO is claiming it as a world record, and it’s a HUGE step for solar thermal energy.

“It's like breaking the sound barrier; this step change proves solar has the potential to compete with the peak performance capabilities of fossil fuel sources,” Dr Alex Wonhas, CSIRO’s Energy Director, told Colin Jeffrey for Gizmag.

The Energy Centre uses a field of more than 600 mirrors (known as heliostats) which are all directed at two towers housing solar receivers and turbines, Gizmag reports.

This supercritical steam is used to drive the world’s most advanced power plant turbines, but previously it’s only been possible to produce it by burning fossil fuels such as coal or gas.

“Instead of relying on burning fossil fuels to produce supercritical steam, this breakthrough demonstrates that the power plants of the future could instead be using the free, zero emission energy of the sun to achieve the same result,” Dr Wonhas explained.

The commercial development of this technology is still a fair way off, but this is an important first step towards a more sustainable future. More

Watch the video to see the plant in action.