A Facebook friend shared the following remarkable poem by Lena Khalaf Tuffaha, who is a co-founder of the Institute for Middle East Understanding based in Seattle. It catches the nightmarish absurdity of the latest invasion of Gaza. 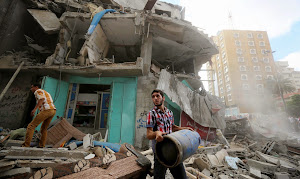 They call us now.

Before they drop the bombs.

and someone who knows my first name

calls and says in perfect Arabic

And in my stupor of sonic booms and glass shattering symphonies

still smashing around in my head

I think “Do I know any Davids in Gaza?”

They call us now to say

You have 58 seconds from the end of this message.

Your house is next.

They think of it as some kind of

It doesn’t matter that

there is nowhere to run to.

It means nothing that the borders are closed

and your papers are worthless

and mark you only for a life sentence

in this prison by the sea

and the alleyways are narrow

and there are more human lives

packed one against the other

more than any other place on earth

We aren’t trying to kill you.

It doesn’t matter that

you can’t call us back to tell us

the people we claim to want aren’t in your house

that there’s no one here

except you and your children

who were cheering for Argentina

sharing the last loaf of bread for this week

counting candles left in case the power goes out.

It doesn’t matter that you have children.

You live in the wrong place

and now is your chance to run

to find your wedding album

or your son’s favorite blanket

or to gather everyone in the house.

It doesn’t matter what you had planned.

It doesn’t matter who you are

Prove you stand on two legs.